DungeonMorphs was one of the first successful RPG-related Kickstarters. Geek Native covered a campaign five years ago, but the original is nine years old. Now it’s back, approaching nearly 200 backers and the US$15,000 target. That’s a big figure but the campaign currently has $11,000 in pledges and you can follow progress at the campaign page.

What do they do? Summon up a dungeon (or appropriate map) in seconds.

It’s worth looking closely at the pledge tiers. Rewards begin at $5 for items like PDF cards or fonts, but not both. You need to step up to the realms of $18 to get the dice and go higher if you want to multi-back all the different DungeonMorph options. Or you could go higher still and get dice, fonts and cards.

The dice are engraved and durable, made by Q-Workshop. There will be three sets of 5 dice each for a total of 90 new designs. The old school blue style cards are 2.5″x2.5″, to allow for a 10×10 grid design at a .25″ scale. New to this Kickstarter are 10″ battlemat style versions where each square of the 10×10 grid is 1″ for miniatures use. Also new is the PDF of sample room descriptions and ideas for stocking the dungeon and cavern designs.

The designs are made by Dyson Logos, who innovated the format, Matt Jackson, Tim Ballew, Sigurd B. Johansson\Brutus Motor, Shane Knysh, and Joe Wetzel who is the founder of Inkwell Ideas.

These two DungeonMorphs haven’t been seen before. We have got a blue title design and one of the dice faces.

What did you learn from the original DungeonMorph Kickstarter that has persuaded you to do something different this time?

I think the biggest mistake I made was under-pricing one reward in particular. We only asked $6 for it, and it cost us $6 to print. While we technically didn’t lose money on it, we didn’t have any extra from that to put towards salaries, promotion, shipping, etc.

Have you heard any cool stories of gamers using DungeonMorphs in an interesting way?

I’m really pleasantly surprised by how many people love the fonts. Once you install the fonts and select one, each letter you press displays a different 10×10 geomorph design. (So it works best if you set it to 100+ point.) You can literally type out a dungeon in a few words!

What has been the most common request for DungeonMorphs?

More! People see them at a convention and anyone who has them asks “When are you making more?” So we finally are!

You were an RPG pioneer in the world of Kickstarter. How do you feel Kickstarter has influenced the tabletop roleplaying games industry in the last 10 years?

Kickstarter certainly helped a few of our projects spread by word of mouth and get more support than they would have otherwise. But I’m not sure how much that’s the case still. I think now you almost need supporters via a mailing list (for example) before your Kickstarter starts. Our first project wouldn’t have been nearly as successful without complete prototypes ahead of time, or a free download version, or some way to develop a list of interested people to contact when the project launches. Tabletop & RPGs Stats: What got you interested in tabletop rolepla… 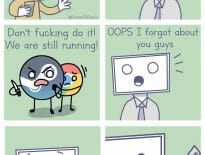