You are here: Home / Games / Tabletop & RPGs / The best selling cartoon and anime RPGs of 2018

This post is part of a series in which we look at the best selling RPGs in each of the genre categories in DriveThruRPG. DriveThruRPG is the undisputed leader in the specialist RPG bookseller market, and we think these charts represent the industry nicely.

This data looks at the relative number of sales (Geek Native has not seen absolute totals) of all RPGs in the ‘anime’ or ‘cartoon’ tag. Authors and publishers can give their games more than one tag and so it is very likely that these games could also appear in the sci-fi or fantasy sections.

There are some important spaces in the anime top ten. These are the Robotech RPGs previously available from Palladium Books. Sadly, these games are no longer available after Palladium lost the license after 30 years.

At the time of posting Ryuutama has a perfect 5/5 on DrivethruRPG after nearly 40 reviews.

The 240-page book was originally developed in Japan by Atsuhiro Okada. The English version was made possible by the game designer Daniel Solis.

The focus of Ryuutama isn’t combat with heroes and villains. Instead, the characters in this game are those roles that might often be the NPCs in others. In Ryuutama players are bakers, farmers and shopkeepers. Together they’re exploring the world and experience is earned by managing to complete journeys to new places.

There is combat in Ryuutama, and it uses the concept of a ‘front line/back line battle mat’ which will be familiar to anyone who’s played a turn-based Japanese computer RPG.

How much should you pay for a best selling anime RPG?

The best selling cartoon and anime RPGs of 2018 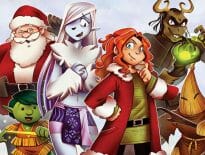 Comics A look inside: NorthStars volume 1 and 2 from Acti… 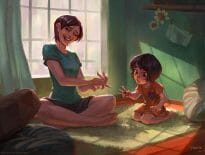