Towards the end of September, we’ll get the chance to back a Kickstarter from EN World’s publishing arm to make the Judge Dredd and The Worlds of 2000 AD RPG a reality. EN Publishing has the license from 2000 AD owners Rebellion.

There are a few things to get your head around here. The first that struck me is the logo. That stands for What’s O.L.D. is N.E.W a game system from EN World owner Russ Morrissey who successfully Kickstarted a pair of books in April 2014. You won’t need either of those books for The Worlds of 2000 AD, though.

The previous Judge Dredd RPG was a d20 product from Mongoose Publishing. It came out at the height of the d20 boom. It’s interesting that Rebellion is not going with 5e at a time when the interest around that system is far higher than interest in d20 ever was. Nor are they going with an established and open alternative system. Did they chafe at the licensing rules?

There are other products that use WOIN like The Possed – For We Are Many and I think they are all EN Publishing. Perhaps Rebellion felt EN Publishing could be more flexible and more likely to flex. Either way; it’s a coup for Russ Morrissey who must be tickled pink.

The Kickstarter imagery shows a number of books including a black hardback Judge Dredd. That’s not the Judge Dredd book. That’s the limited edition of the core rulebook which will be exclusive to Kickstarter.

Dredd is the most iconic of the 2000 AD characters, and the character we felt it appropriate to start with. However, the rules contained in the Judge Dredd & The Worlds of 2000 AD hardcover core rulebook will be applicable to all 2000 AD settings.

The next book on the release schedule is The Robot Wars. This is a story arc when a robot called Call-Me-Kenneth leads a rebellion of robots on Megacity One.

What other titles are in The Worlds of 2000 AD?

Neither Rebellion nor EN Publishing have confirmed anything but based on the titles mentioned on the official Worlds of 2000 AD RPG.com my bet is that either Slaine or Rogue Trooper will be next. Slaine is a contender as a popular fantasy title and Rogue Trooper as Rebellion are currently promoting the title.

Here’s the full list of likely The Worlds of 2000 AD RPG properties;

I think additional Judge Dredd supplements are very likely too. 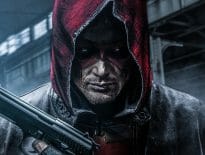 Geek Stuff Here is Jensen Ackles as The Red Hood 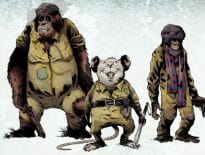