You are here: Home / GameWyrd / The Lost Archives / The Friendly Face of Fear

Oh my gwad. This is an original article from 2001 back when I was exploring the possibility of writing editorial dialog for web sites. I paid no attention to the writing. It was all about the HTML construct and whether the concept worked.

The Friendly Face of Fear

“The Friendly Face of Fear” comes in two parts. Advice and tips on how to scare your players can be found below and the user contributed “You Know Your GM’s Evil When…” can be found here.

People like to be scared. Roller coasters would be a multi-million dollar waste of engineering excellence if that weren’t true. People like to go watch horror movies and authors like Stephen King and Dean Koontz sell their books by hundreds of thousands.

The chances are that your players could do with a good scare to. It’s the exhalation of the unknown that inspires many players into action and it’s the satisfaction of coming out trumps despite the odds that energises many other players. Therein lies the rub; in comparison to making the audience jump when the digitally enhanced monster suddenly lurches into sight it can be frightfully hard to scare confidant players who know what they’re doing. In a horror novel and in many a slasher movie the tension is often built up by having the cast of heroes taken out one at a time by the villain. Unless you want to bring your scenario to a crashing halt then the chances are you don’t want to murder all your characters.
Horror has been an important driving force in the history of roleplaying games. The famous Call of Cthulhu could very well be described as the first of the second generation of RPGs. It was Call of Cthulhu that introduced the concept that the characters simply couldn’t rush in to solve every problem with swords, sorcery or big guns. The primary puzzle in a Call of Cthulhu game was never the matter of crossing the booby-trapped corridor or even finding a way to destroy the evil artefact but it was often the challenge of simply staying alive. The Big Scary Monsters actually forced roleplay over and above rollplay. Similarly it could be argued that Vampire: the Masquerade was one of the first games in the third generation of RPGs. Vampire: tM played on many different horrors – the personal horror of being an unnatural monster and the inevitable decline to the Beast, the dark apathy of the World of Darkness and, of course, the horrific actions that the inhumane vampires carried out. Vampire didn’t have to be played as a horror (cue tragically hip teenage angst, super powered beings, Machiavellian politics or occult mystery) but an element of fear was always present.

Horror doesn’t necessarily mean horrific and horror does not always inspire fear. The chances are that even detailed description of a slime drooling demon gobbling up unfortunate peasants will just bore your players – or, in the worst case, get drowned out by cries of “I attack it!”. It is entirely possible to run a horrific scenario without even making a player blink and it is also possible to instill a bit of fear into a high fantasy game.
The unknown
One of the biggest “fear reactions” I’ve seen in players was in a scene that saw the characters trying to wade through a dangerous swamp. Just as the heroes found themselves busy trying to pull themselves free of some particularly viscous mud I let one of the players know that their character had spotted a disturbance on the surface of the swamp beginning to swim its way towards him. The player I had picked on knew fine well that his character was going to be the last one pulled free of the mud and the first that the “disturbance” would reach. His frantic efforts to inspire the rest of the party to hurry helped greatly in spreading the unease to everyone present. When it was discovered that a giant and very dangerous snake was creating the “disturbance” – everyone was relieved. Why? Should the discovery have confirmed their fears and panicked the group further? Well, perhaps, but what actually happened was that all the other possibilities as to what the disturbance might be had been closed off. It also gave the player something concrete to focus on. The unknown had become known.
Friends and allies
A simple but effective trick a GM can deploy is to introduce friendly and useful NPCs for the players to interact with. These NPCs can then be killed off, driven insane, uncovered as dangerous foes, in suitable order to inspire greater and greater concern in the players. In online games such as MUSHes there is the added bonus that the players may not even be aware of which of the other characters in the game are PCs and which are NPCs. A danger is that an inexperienced GM creates a super powerful NPC that the players fail to relate too. If the players don’t care two jiffs about any given NPC they’re much less likely to care if the NPC is mysteriously or horribly slain – even if they should fear whatever power managed to defeat such a powerful NPC. Too many inexperienced GMs create super powered NPCs as surrogate characters for their own games. A more effective approach might be to create an NPC that has an important “Big Brother” effect on the game world rather than the characters. The players might get peeved when Super NPC #1 saves them yet again from Certain Doom but they might very well be thankful if the same NPC is deployed in keeping the kingdom stable while the heroes are given the chance of battle the very same Certain Doom. In the latter example, when you kill off the NPC, the characters have just lost someone they can admit was important.

Suspense… and failure
Movies often make use of suspense. Even if there are still thirty minutes of a movie to go most of the audience will be watching with baited breath to see whether the hero successfully crosses the rope bridge or not. In a good movie the audience should be relating to the hero by that point, in a roleplaying game the work has already been done because the players are almost certainly in touch with their own characters. In the rope bridge example it is easy enough to make the players roll on their character’s dexterity / balance / appropriate stat and for the players to understand how important the roll is. The tricky bit is being prepared for failure. If the players have settled into the mind set that there is no chance of their characters toppling head long off the rope bridge because it’ll screw up the game then you’re in trouble. The solution is to build failure into the game. Work out in advance what will happen should one of the characters slip and fall. You don’t have to kill the character off, you could have her splash down into the river below, have the hero mysteriously vanish into thin air even as she falls or even fake a death. You can make it appear that the fall’s been fatal but then introduce encounters later on that give the party a chance to make amends. If a fall means that the party fails to reach its destination in time then the players wont dismiss the challenge even if there is a handy river of deep water just below.

Collaborate with the players
A sneaky trick is to speak to a player in advance and let her know that you may run a scene in which it appears that something nasty happens to her character. Get her to play along. I’ve had a player start to roll up a replacement character as a bluff before and it was certainly effective. If this “bluff” character is seen to have failed and died in the game challenge any future attempts by the players that night to address the same challenge are likely to be more cautious. Collaborating with large number of players in advance can be even more effective. I’ve taken part in a game where the GM spoke to all but one of the players in advancem told them that the scenario that night would be something special and asked that they ham up and exaggerate their roleplaying. The one player who wasn’t included was in fact controlling the character having a very strange dream instead.

Outclass them
The idea of terrorising the players with Big Scary Monsters fits into the “Outclass Them” heading. It’s a concept that is surprising hard to do right. The danger is that the players will either give up, feel resentful or just frustrated. The trick is to keep the characters in the action. Having a insane red dragon sweep down from the sky to pluck at your group of Halflings will certainly put the group on the defensive but if there is nothing the Halflings can do about the problem then the players will just sit back and hope or wait for the inevitable. A better idea might be to have the Halflings try and sneak by the dragon without waking it. This example puts the focus very much back on the Halflings and the players. If you’ve been keeping the “Suspense… and failure” section in mind as you run the game then the players will know that bad things will happen if the Dragon wakes up.

Sometimes they come back
The re-occurring villain can be the life-blood of many campaigns. Near death encounters with the baddies can hard for the GM to run but they can also give the characters valid fears for any future encounters. Of course, it’s the nature of the game that the heroes will aspire for the re-match and seek to defeat the villain but they’ll only want that when they’re feeling ready.

The second half of this essay comes in the form of the user contributed humour of “You Know Your GM’s Evil When…”.

"Encumbrance - Did you even read the rules?"
The Lost Archives

The Friendly Face of Fear 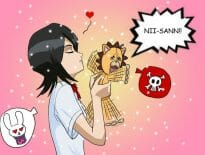