You are here: Home / Games / Tabletop & RPGs / Inspired by RTS and MOBA: The Ether Wars board game

Ether Wars is a board game inspired by Real Time Strategy (RTS) and Multiplayer Online Battle Arena (MOBA) computer games. The Spanish crew behind it are hoping to use Kickstarter to launch the game and perhaps as small studio. I think it’s worth taking a look at the campaign page.

This project could fund. They’ve more than $16k in the bank but have about $20k to go with just a week to do it. It could fund because the game is interesting enough to get the attention of some of the bigger board game communities and enjoy the rush of attention that’ll bring.

It’s not too expensive to back either. A pledge of $52 gets you the full game, all the stretch goals (dangerous) and your name in the manual. You’ll have to add shipping later but there are estimates on the campaign page for that. Stepping up to just $60 gets you all that plus some PDF ready to print posters and one more dedicated to you. The retailers have a $215 option for 5 copies of the game and those tiers are attracting attention.

The game itself looks very nice. This is one of those board games you could play in your local gaming cafe and attract attention. I think the customised dice are effective and a nice touch – far more engaging than dealing with look-up tables.

In particular, I think the four races are nicely balanced and pretty interesting. It’s easy to imagine that if Ether Wars ever did become a huge success that there’s enough story here to spawn books or an RPG. As it stands now; the fate of the game is in the hands of the Kickstarter gods.

Inspired by RTS and MOBA: The Ether Wars board game 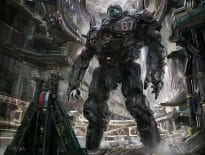 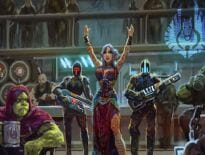