You are here: Home / Games / Tabletop & RPGs / What stirs in the Titansgrave: Ashes of Valkana (Part 1)

Wil Wheaton of Geek & Sundry is running a tabletop RPG show. The game is his Titansgrave, not yet published by Green Ronin, using the new Fantasy AGE system.

There are already three parts to the show, chapters 0, 1 and 2. This post looks at chapter 1 and with the chapter 0 video to introduce the characters shared at the bottom. There are a few things worth chatting about; how does this RPG session compare to yours, what tips can we pick up from Wil and what would you encourage him to do next? I also think the format of the show is hugely interesting with some quality motion graphics.

The players are Hank Green (Aankia), Laura Bailey (Lemley), Yuri Lowenthal (S’lethk) and Alison Haislip (Kiliel). What a good bunch. Not a sign of rule-lawyers, min-maxing or power-gaming and plenty of cooperation and storytelling.

At the game set up (chapter 0) Wil had already made sure characters had some connections and some secrets. Once that was done, in a light touch, no drama sort of way, he placed them firmly on track. The assumption was the whole drama around a cyborg janitor was nothing but back story the players hadn’t heard until then but they were firmly placed on the road to the Inn.

The Inn encounter was half dropping the group in the deep end – I’m not sure of their prior RPG experience, certainly it seems like most have played – but they had a single task to speak to someone which very quickly escalated into the battle of the boasts. This was clever as it gave the players room to explore their characters a little, to test the system in non-lethal rolls and yet it made them think on their feet.

Without a doubt the graphics used in the video add a heap of value to it. I don’t think we’re quite challenging Twitch to mainstream gaming entertainment but my gut feeling is that there’s something in here. We’ll listen to podcasts, we’ll watch theatre, enjoy audiobooks and subscribe in our millions to vloggers getting tattoos – surely this is the best of all those worlds?

Wil seems to have oodles of experience as a GM. The trip from the Pegasus Inn to the ambush scene was super quick… you could accuse the bandits of launching their ambush too close to civilisation but for the purposes of keeping the drama up it was a wise decision. A fight to round off chapter one was a good idea too, after the stretching their wings at Pegasus Inn the players were ready to step up the action.

The Fantasy AGE system seems as fast and smooth as we’d hope it would be. I’m particularly interested in Valkana’s Legendary Rules. I think it’s a nice touch but comes at a cost. We now know that the Pegasus Inn survives a few years into the future because Wil’s had to narrate that flash forward.

Are you watching Titansgrave: Ashes of Valkana? What do you make of it so far?

What stirs in the Titansgrave: Ashes of Valkana (Part 1) 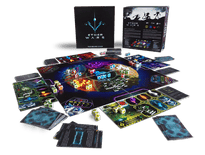 Tabletop & RPGs Inspired by RTS and MOBA: The Ether Wars board gam… 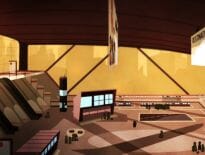