You are here: Home / Games / Tabletop & RPGs / Box of tricks: A review of Dungeon Master’s Guide 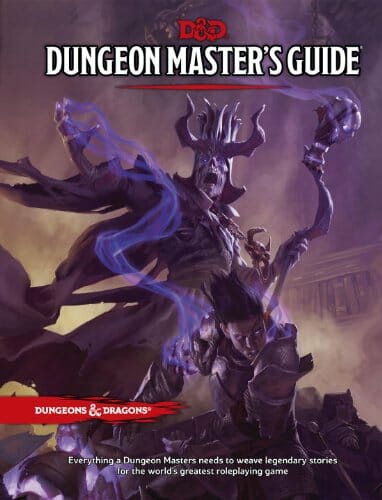 Dungeon Master’s Guide is the third core book in the new Dungeons & Dragons. It follows the Player’s Handbook and the Monster Manual. Wizards of the Coast’s staggered release schedule for this edition of D&D made sense, helped keep the quality up but I sense some D&D 5e fans will be saying “At last!” now the book is available.

The title of this review describes the book as a “box of tricks”. The phrase comes to mind for two reasons; this book is incredibly diverse, there’s a little of everything in here, especially items and secondly the assorted contents are likely to be incredibly useful to a DM in a pinch.

Diversity is a good thing. The flipside is, however, that the DM’s Guide feels fragmented in part, chaotic almost and I suspect many hours will be spend page flipping. In hindsight, I can see why Wizards of the Coast was attracted to the electronic search and find offered by something like Codename: Morningstar.

There’s a brief but important introduction and then 9 chapters, 4 sets of appendix and an index.

It’s worth not skipping over the introduction. After laying out what to expect the DM’s Guide first piece of advice is hugely helpful to new and experienced alike;

Know Your Players
The success of a D&D game hinges on your ability to entertain the other players at the game table. Whereas their role is to create characters (the protagonists of the campaign), breathe life into them, and help steer the campaign through their characters’ actions, your role is to keep the players (and yourself) interested and immersed in the world you’ve created, and to let their characters do awesome things.

Knowing what your players enjoy most about the D&D game helps you create and run adventures that they will enjoy and remember. Once you know which of the following activities each player in your group enjoys the most, you can tailor adventures that satisfy your player’s preferences as much as possible, thus keeping them engaged.

I suppose veteran DMs might caution against letting players railroad their decisions into the game (such as playing characters that don’t fit the theme the group wanted to play) but this is solid advice. Keep your players in mind. Advice like this is appropriate for pretty much every roleplaying game.

The same “pretty much for every roleplaying game” comment applies to the first part of the book and this too is a good thing. “A World of Your Own” addresses the various types of fantasy that D&D might fit; everything from heroic fantasy to wuxia. It talks about the type of game players might want; dungeon crawls or storytelling. There are thoughts on gods, magic, factions and settlements. A bonus of this approach is that DM’s are told about the established D&D worlds; some of which might be new to groups just starting their D&D life. You could – and perhaps should – apply the wisdom of this section to other fantasy games.

That’s not true for the very next part of the book. In the next chapter the authors Jeremy Crawford, Christopher Perkins and James Wyatt move on to talking about the Multiverse. In the Multiverse section we root ourselves firmly in D&D cosmology. Here we discuss the Planar Landscape. Your world will, somewhere, somehow, fit into this wrapper. We’re told, very briefly, of other locations of interest in the Planes – like Ravenloft, for example. At the most these references will act as inspiration and reminders to bold DMs and at the least they’re warning signs which read “something else is here” for cautious DMs who’d prefer to wait on official supplements from Wizards of the Coast before allowing their players to explore their.

The second chapter discusses NPCs, landscapes and adventures. It seems best to treat this section as partly editorial safety checks to ensure that a DM isn’t making a rookie mistake and partly inspiration. It is technically possibly to randomly roll up an outcome on almost any issue discussed. I wonder whether any GM would, after reading the advice elsewhere in the book, toss a d20 to decide what a villain is up to or what the plot twist might be.

I think the Between Adventure section is important. Just by discussing issues like “Linking Adventures” Wizards are suggesting a level of cohesion to games that weren’t always necessary previously. My gut feeling is that newcomers to the hobby are less likely to have groups of adventurers who apparently teleport from the mouth of one dungeon to another between sessions.

The Treasure section is huge. The DM’s Guide really is a box of magic when it comes to loot it holds. The good news is that this section is nicely illustrated. You can see so many of the magical wonders described to DMs.

The third part of the book gets back into the nitty gritty of running the game. For example, this is an actual D&D book that discusses whether to stick strictly to the dice rolls or when to fudge it. Here the authors manage to ensure that D&D 5e is both OSR and post-old school at the same time. Impossible? No. The DM’s Guide is here to equip the DM so she can run the type of game the group wants.

The first two books have set a pretty high bar when it comes to production value, layout, design and ease of use. The Dungeon Master’s Guide does just as well. This book feels like an investment. This book feels like it will be a useful and trusted companion until D&D 6e (or D&D 5.5e) is announced.

On reflection, I’m not sure what I expected from 5e’s Dungeon Master’s Guide. Had it turned out to be a collection of new races, classes and treasure that the purchase of the book unlocks I wouldn’t have been surprised. This edition of Dungeon Master’s Guide is much better than that. This is resource. This book is something that DMs, GMs and Storytellers will find value in reading, having and checking now and then.

D&D 5e DM? Buy the book. Ask for it for Christmas. It deserves a place on your shelf even if you won’t use all of it. This is a box of tricks you can reach into and find something helpful when you need a hand.

The video tour below is made with Google+ Auto Awesome, photos taken with my Nexus 7 and uses colour filters. It acts as a peak inside the covers not as a representation of print quality.

Disclaimer: My copy of Dungeon Master’s Guide was provided for review. I’ve played the game and used the DM’s Guide at the tabletop.

Box of tricks: A review of Dungeon Master’s Guide

Tabletop & RPGs Rum & Bones Kickstarter approaches half a mil…
💰 Copper Coins 💰 Geek Native is an affiliate and may earn commission on purchases you make from third-party sites.
🍪 Privacy & Cookies 🍪 The site uses cookies because that's the internet. By using the site, you agree to their use and 1d4-3 privacy damage (tracking). If you defeat cookies via ad blocking, please consider the Patreon. An intro to cookies, and how to control them, can be found here.
I Accept