You are here: Home / Games / Tabletop & RPGs / Riders: A Game About Cheating Doomsday

In Riders, players take on the role of servants to the four Horsemen of the Apocalypse – and they do it riding around on motorbikes. Neat, huh?

Essentially, the end of times looms large and not everyone’s as keen about it as the Horsemen. A few entities – the Shepherds – like what they have on Earth, as do the servants. So, you plan to do something about it.

In the normal order of things, the clock would tick down to Doomsday, the Metatron would cast an eye over the world, and if the conditions seemed right the Horsemen would ride out. However, the Shepherds have equipped you with the Rite of Ea – a way to distract the Metatron. If you can fix things on Earth before he spots them, you can stall the clock – heck, maybe you could even tick it a tock or two?

Riders, written by Caias Ward (responsible for Trigger Happy), is currently ticking toward a Kickstarter deadline, but I’ve seen the rough playtest document. Caias has been rolling the playtest around for a while, and now he’s looking to fund the final stage.

The game system uses a fairly standard mechanic of 2 six-sided dice plus modifier versus a target number. However, you can draw on personal experience and expertise for extra modifiers, and even roll extra dice if you’re willing to pull on the power of your associated Horseman. The negative side of that, well… expect the Doomsday clock to tick a little closer to midnight.

Riders has a feel of the espionage genre going on or possibly the hustle-style scam. The players play Riders looking to pull the wool over the eyes of the greater powers. If you can resolve an issue before anyone notices it, you can hold back the hands of time and save the world from certain doom.

The patronage of the four Horsemen – Conflict, Famine, Death and War – provides characters with special abilities and the means to influence challenges that align with their qualities. So, a Rider of War can hear the sounds of impending battle and therefore will never suffer an ambush and can summon a mystic sword to hand with a blade slick with blood.

The game system gives the players all the agency by depriving the GM of dice. They determine their fate in rolling dice and choosing to draw on powers to influence their rolls. The end of the world depends entirely on their decisions, their skills and their good fortune. A willing to play the odds means that sometimes you will need to call on your Horseman’s powers to succeed, and then fight back hard to regain lost ground.

Each session of the game revolves around the Riders trying to save the world through some small action. Saving a life, righting a wrong. The players and GM agree on the focus of the story and tell a tale of how the Doomsday Clock stopped tick and we avoided the Apocalypse for another day. There are forces of Heaven and Hell that would have the world end, and will make it difficult. Mortal forces, like doomsday cults and the like, will also have their own agenda and seek to undue the good the Riders set out to do.

Each session starts with a Diner scene where the gathered Riders agree on the action for that session. And, each session ends with the opportunity to determine the success or failure of the Riders versus the Doomsday Clock. They actual get the chance to battle the Clock in a real hell-for-leather battle, with the fate of the world as a prize! Depending on how often the Riders have given in and used the greater power available from tapping into a Horseman’s power – which adds extra dice to a roll instead of just modifiers – will determine the combat potential of the Clock. How they play the game will be instrumental in determining the power and potential of their end of Chapter battle.

As well as setting information, game mechanics and a bestiary of potential allies and adversaries, Riders will undoubtedly include some excellent art if Trigger Happy is anything to go by. The Kickstarter includes some of the sample layout for the game, with a highly eclectic style.

A pledge of $12 gets you the PDF of the game, with higher levels for softcover and hardcover editions. The Kickstarter has already achieved 145% funding at time of writing with only a few hours to go – but on the countdown to Doomsday, that almost seems appropriate to draw attention to it now.

Riders: A Game About Cheating Doomsday

time to read: 3 min
Books Mashpunk: A review of In Dark Service 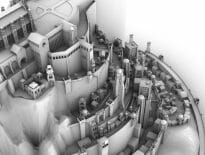