You are here: Home / Games / Tabletop & RPGs / Forewarned Is Forearmed: A Review of Thulian Echoes 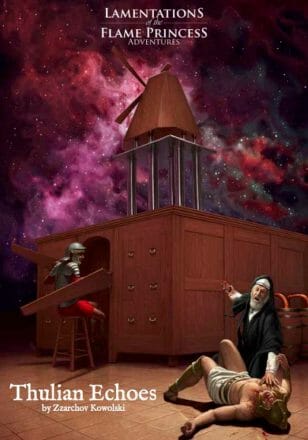 Does anyone give a second thought to the impact an adventuring party has on their environment? As they rampage through a monster’s lair or rampage through invaded territory, they make changes, slay doers and makers, and leave carnage in their wake – so, what happens next?

Oddly, this is something I have considered before as a gamemaster. I ran the classic Fighting Fantasy adventure The Wishing Well at three consecutive conventions – and each time, the actions of the previous adventurers changed the shape, content and inhabitants of the dungeon. The activity or indifference of the earlier party could fundamentally change the fate of those who followed.

In Thulian Echoes, Zzarchov Kowolski has taken this very concept and turned it into a thoroughly entertaining adventure where the players can shape the destiny of their precious characters by defining the events of the distant past.

Form
Thulian Echoes is an adventure for Lamentations of the Flame Princess, written by Zzarchov Kowolski. Running to 31-pages, it includes front and back covers and a full map of the dungeon at the heart of the adventure.

As always, James Raggi has secured some stunning art for the cover of the adventure, by Yannick Bouchard. The interior features numerous black-and-white illustrations by Kelvin Green, with a slightly manga-esque slant to the features of the characters. However, the standard is good and the images admirably convey key features, sights and locations.

Features
Thulian Echoes is, at heart, a dungeon on an island in the middle of a cold and unforgiving sea. The player characters stumble across a book, an ancient and handwritten text, that tells of an expedition to the island in the distant past.

That’s the hook for the adventure, a journal, allowing a gamemaster to include the volume amongst the more interesting finds of an average dungeon haul. Potentially, a party might possess the book for a while before realising its worth – or the gamemaster can shortcut to the venture by drawing attention to the unusual find.

Once the characters start reading, they’ll realise it’s a journal – and then the gamemaster can hand out the character sheets. The adventure includes six pre-generated characters for Lamentations of the Flame Princess, but as it’s the roles rather than the specifics of the individuals that matter you can substitute any suitable system, Old School Renaissance or otherwise.

The adventure details an island off the coast of Iceland and the lair hidden there, filled – potentially – with untold treasures. Each and every location and action that characters might take on the island may serve to set a tag, with all the considered possibilities listed toward the end of the adventure. If, for example, the original treasure-hunters never make it off the island, then their boat will have been left behind on the shore and that can set a tag – all CAPITALISED in the text for clarity.

Some gamemasters balk at the possibility of killing off player characters willy-nilly; here, in the retelling of events in the journal, this need not be a concern. On the other hand, Zzarchov does acknowledge killing off a character too early will leave a player with nothing to do, so suggests a lucky break mechanic to avoid certain death too soon.

Whether the GM chooses to use lucky breaks or not, Thulian Echoes offers the chance to be merciless and cruel without worrying too much about hurting anyone’s feelings – as events pose no threat to cherished adventures in the beginning. The players, however, should be mindful of events – and hopefully keep a record, or at least pay attention. Once the whole party dies, the journal comes to an abrupt end – and then the fun begins.

With the flashback to events of the journal completed, the player characters now have the information they need and the lure of wealth and power to draw them to the island and avoid the mistakes of the past. Potentially, if the players played the flashback really well, it might be an incredibly easy task to stroll in and walk away with a fortune. Benefiting from hindsight (or foresight), they can bypass traps and avoid certain death to reach the inner sanctum and claim the prize.

It’s a very neat idea – and while you probably wouldn’t want to overuse it, it does have potential in other games. I don’t see why you couldn’t take the premise and the broad sweep of the plot and use it for a game with an espionage theme or set in deep space. The same principles apply, but the characters uncover it from an encrypted mission report or a retrieved distress buoy in the void.

For any concerned about the Lamentations label and suitability for your gaming group – the adventure contains nothing overtly gruesome, violent or sexual. Well, you might spy some male genitalia if you’re really looking, but little more.

Final Thoughts
It’s one of those situations where you kick yourself for never having done it before. The idea of taking a location and making the players fundamentally responsible for its future state sounds like something you’d expect from a storytelling meta-game like Microscope. In Thulian Echoes, Zzarchov Kowolski has done a sterling job creating a structured approach to having the players bait their own trap by taking responsibility for the actions of those who went before them.

With the excellent production values of the product – especially that great cover and finely rendered map – Thulian Echoes offers a finely wrought challenge both for the GM to run and the players to negotiate safely – twice.

Forewarned Is Forearmed: A Review of Thulian Echoes

Anime Competition: Win Pyscho-Pass on Blu-ray
💰 Copper Coins 💰 Geek Native is an affiliate and may earn commission on purchases you make from third-party sites.
🍪 Privacy & Cookies 🍪 The site uses cookies to survive. By accessing the site, you agree to use your browser to control cookie use or take 1d4-3 privacy damage (tracking). If you defeat cookies via ad blocking, please consider the Patreon. An intro to cookies, and how to control them, can be found here. I Manage Cookies