You are here: Home / Games / Tabletop & RPGs / Fancy a Jelly Baby: A Doctor Who – The Fourth Doctor Sourcebook review 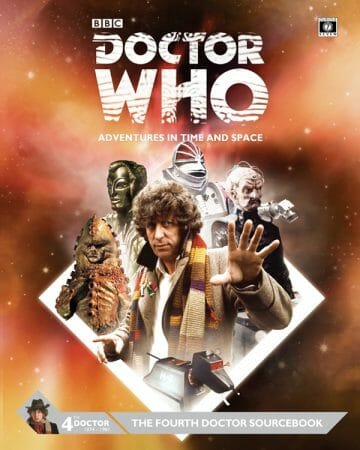 The Fourth Doctor Sourcebook on RPGNow

Travellers in the Fourth Dimension, fighting against tyranny, ignorance and dark forces beyond imagination, The Doctor and his companions have voyaged through 800 episodes. Despite the multitude of stories, you’d think a commonality in villains and plots would mean after a while you’d just start repeating yourself.

However, it doesn’t necessarily occur to you, unless you give it some consideration, that the various incarnations of The Doctor are sufficiently unalike – given the different actors, writers and directors – that the Cubicle 7 series of Sourcebooks will hardly ever cover the same ground. Yes, the core plots might repeat – with only so many variations on a story when you boil it down to basics – but each variation in characters and co-conspirators brings a newness.

So, aside from Jelly Babies and unfeasibly long scarves – aspects of costume that have defined the quintessential Time Lord, what does The Fourth Doctor Sourcebook for the Doctor Who: Adventures in Time and Space tabletop RPG have to offer?

Form
Doctor Who: The Fourth Doctor Sourcebook for Doctor Who: Adventures in Time and Space is available as a hardback book or, as in this review, a 256-page PDF. Written by Andrew Peregrine and Walt Ciechanowski, and published by Cubicle 7, under licence from the BBC.

The book follows an identical format to it’s predecessors, with clear text presented in two columns, but dispenses with the business of dividing the stories across arbitrary chapters. So, after introductions and companions, you get a whopping 219-page Chapter 3.

The book features colour images captured from both the series and staged publicity photos. The whole books looks great and the format makes for easy reading, whether on paper or read from a tablet.

Features
Here in the fourth volume of the Doctor Who Sourcebook series, Tom Baker’s iteration of the wandering Time Lord makes his appearance, weighing in with the most adventures any incarnation of the Doctor has had to offer. Importantly, unlike his predecessors, the Fourth Doctor hardly ever had a repeat appearance of his adversaries, ensuring a wealth of new material in this volume for your game.

Better yet, as the longest serving Doctor, the writers have forty-three different stories to mine for potential game material, including an entry in an Appendix that covers the aborted tale Shada. A wealth of new adversaries, companions, gadgets and traits makes for a great read, filled with interesting ideas and expansions to the core system options.

At a basic level, for those not familiar with The Doctor of this period, the Sourcebook provides a synopsis of every single adventure. Most of these run to about a page in length. Each story then includes notes on connections to other adventures, references to time periods, or notable events common to other incarnations of The Doctor.

For those fascinated by continuity, the Fourth Doctor has a wealth of connections with present day Who. In Genesis of the Daleks, he fires one of the first shots of the Time War (though the actual first shot might be open to argument). Across the regeneration, he returns to Gallifrey on several occasions, and when he isn’t on site, the Time Lords often intervene or divert him instead. In both versions of Romana, we get a first long-term look at another Gallifreyan, and in K-9, one of the most enduring and much loved companions.

The bulk of each story overview considers the methods for using the general themes or events in a story, re-using planets or locations, revisiting stories to find out what happens next, or creating original adventures with similar techniques. For example, several Fourth Doctor adventures take stories from myth or facets of folklore and weave sci-fi into the mix. The Fourth Doctor often left in a hurry or got waylaid by the Time Lords, so many of his stories have rich potential for sequels or returns.

So, you might be asking what does the Fourth Doctor Sourcebook offer that hasn’t been covered in the three previous volumes?

Well, Chapter 1, the Introduction, covers a few basic new traits and gadget, but the meat of these appear scattered throughout the text of the various stories. The Sourcebook includes, amongst other Gadgets: The Master’s Tissue Compression Eliminator; the Key to Time Tracker; Disintegrator Guns; Time Rings; the Elixir of Life; Leela’s trusty Janis Thorn; Magnus Greel’s Time Cabinet; and the outlawed Demat Gun, capable of erasing targets from the timestream.

Supporting these, we get new Gadget Traits of Compress and Track, both useful in the construction of other devices, like the Slitheen Gas Compression technology, I daresay. The section also includes several new Character Traits, like Arrogant, Cloistered, Huge, Noble, Loud, and Wanted – a few specifically for the introduction of Time Lord, as recurring thorns in the time traveller’s side, and one to accommodate robots composed of living metal (you guess which one).

While the previous Doctors had companions, they tended to either fall into the category of unwanted passengers – like Barbara and Ian – or cyphers to allow the Doctor to spout exposition, sound clever, and generally come across as mildly condescending. The Fourth Doctor, on the other hand, shared his journeys with adults quite capable in their own right. They might have been immature, like Adric or Nyssa, but they possessed experience, natural traits and expertise that allowed them to handle themselves.

The Doctor didn’t have to spend half his time rescuing his companions – they often rescued him. Otherwise, they followed their own hunches or engaged with people and events to progress the plot in their own way. In Romana, the Doctor also found an (almost) equal – a Time Lord far better schooled in many aspects of time theory and advanced technology even than himself.

Chapter 2 provides background and personal information on all the companions new to the Fourth Doctor’s era, as well as brief information and statistics for all companion – including Harry Sullivan and Sarah Jane Smith. You also have information on both versions of Romana. The section rounds out with stats for the Fourth Doctor and his version of the TARDIS, distinguished by The Doctor’s increased ability to get to wherever he happened to want to go.

The Sourcebook considers various types of standard and common adventure formats, which the stories of the Fourth Doctor return to time and again. By including stories like this yourself, you can instil some of the atmosphere of the Tom Baker period, especially if combined with a Gothic aesthetic common to this period. The common types of adventure include the base-under-siege, prison escape, variants on origin stories (whether the beginning of the Daleks or the demise of the Cybermen), capers, mythological mash-ups (like The Horns of Nimon or Underworld), pulpy horror (such as the Doctor’s encounters with Sutekh, Magnus Greel or the Rutan), and the outright nonsensical (like the Zygon attempt to take over the Earth… little improved in their most recent attempt).

The Fourth Doctor’s tenure saw considerable demystification of the Time Lords. Far from the shadowy, all-powerful overlords that sentenced the Second Doctor to exile, these Gallifreyan bureaucrats are pompous, aloof and deeply flawed individuals. The Time Lords have chosen to distance themselves from the Universe, yet at the same time seem intent on interfering through reluctant ‘tools’ like The Doctor. We also see the Celestial Intervention Agency in action on more than one occasion.

Key appearances of or relating to the Time Lords are: Morbius; the Master (two versions); various accoutrements of Time Lord society, including the Matrix, for which the supplement includes basic rules in terms of handling and transforming the virtual reality database; and various paraphernalia of Rassilon, artifacts held by various Gallifreyans in office, yet who happen to be largely ignorant of their true power.

The period also sees the first example of a quest – the search for the six parts of the Key to Time, which also set the stage for future use of arc stories that bridged multiple stories into ongoing ‘campaigns’. We also meet extra-dimensional entities, like the Guardians, and almost Cthulhu Mythos-like entities, like Fendahl and Sutekh – extra-dimensional or plain alien adversaries waiting for when celestial markers are aligned.

Scattered throughout the forty-three included stories the GM will find statistics for Morbius, the Master (The Deadly Assassin), Davros, Mark III Dalek, Model 5 Cybermen, Zygons, Sutekh the Destroyer, the Sisters of Karn, the Mandragora Helix, Magnus Greel and Mr Sin, Rutan and Sontaran, Movellan, Scaroth and the Jagoroth, Meglos, the Nimon, the Great Vampires, Professor Chronotis, and Giant Rats. We only see the decayed version of The Master (as played by Peter Pratt) in this volume. I suspect we will see the Anthony Ainley iteration of The Master make his appearance in The Fifth Doctor Sourcebook.

If I were to cast a critical eye over the Sourcebook, I would say that the edit seems rushed. Having read all the previous Sourcebooks, I have not noticed so many minor errors and oversights, like the presence of two Richard Starks in The Headless Horseman adventure seed, the probably quite untrustworthy Dr Scam – which should be Scarn, and reference to the non-existent episode The Wolves of Fenric (yes, that’s how Fenric referred to his pawns, but the reference in the text appears to be to the story). As I’m reading a PDF, Cubicle 7 have the chance to do some house-keeping of this errata in an update and make the corrections before going to print. I only even mention it because if the previous Sourcebooks had errors, I didn’t spot them… these just seemed to stick out.

Final Thoughts
As clearly shown in the recent 50th anniversary celebrations and episode, Tom Baker’s Doctor has a very special place in the hearts of fans and in the centre of Who continuity. He portrayed a bohemian, eccentric time traveller, unpredictable with dark undertones and always a roguish smile, backed by a crumpled paper bag of jelly babies. The Fourth Doctor’s stories forged the foundation of Time Lord society as we know it now, visited the origin of the Daleks, and met many aliens and adversaries deemed worthy to revisit and reboot in recent times. This Sourcebook offers a mass of potential in recreating, revisiting or riffing upon those adventures, making a very strong recommendation for this volume as a must-have, even if you haven’t been tempted up to now.

Fancy a Jelly Baby: A Doctor Who – The Fourth Doctor Sourcebook review 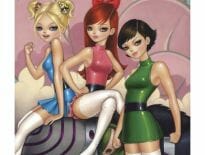 Comics Too sexy to sell – the Powerpuff Girls 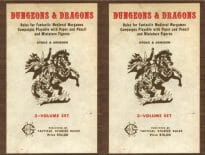