You are here: Home / Games / Tabletop & RPGs / How does the celery help?: A Review of The Fifth Doctor Sourcebook 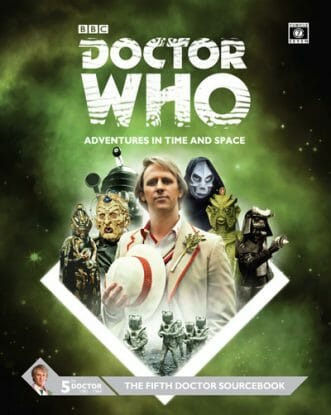 The Fifth Doctor Sourcebook on RPGNow

Speaking personally, when I first heard that Cubicle 7 would be releasing a range of Doctor Who Sourcebooks handling each regeneration in turn, I was excited. Who wouldn’t be? The Doctor Who role-playing game and the Vortex system running underneath it have been a breath of fresh air.

I have been a fan of the series for decades now and I have weathered the storm of series-related gaming materials. I have my copies of FASA’s Doctor Who RPG and the paperback Timelord tucked away on the shelf. Like Gollum, I hoard my precious treasures.

In Cubicle 7, a chance came anew – very much like a regeneration – and they took it on with aplomb. As a fan, I might have been frustrated with the slow progress from one book to another, but I also acknowledge the complexities of dealing with licences and byzantine organisations like the BBC.

Anyway – I digress. After the initial surge of excitement about the Sourcebooks, the second thought was… what would these books present to the gamer / reader? I mean, you have a dozen Doctors to cover and a finite range of adventures. How do you squeeze a Sourcebook out of Colin Baker’s tenure, never mind Paul McGann’s sole outing in the TV movie?

Here – in the Fifth Doctor – we have the hit the start of that road. Following in the frankly overwhelming shadows / prodigious footsteps of Tom Baker’s Fourth Doctor, what could the series offer – and, in turn, what might fill these pages of this Sourcebook?

Form
The version of The Fifth Doctor Sourcebook in review is the electronic one, but each Sourcebook has come available – after a short wait – as a smartly presented hardback volume. The PDF, from Cubicle 7, is 160 pages in length and richly decorated with images snatched from The Doctor’s varied adventures. Adventure overviews feature various image captures from scenes, with close-ups of characters when presenting their in-game information and statistics.

The PDF adopts a two-column format with boxed information presenting gadgets, new traits and similar. Unlike the earlier volumes in the series, this book casts the business of chapters aside when it comes to the series overview, gathering them together into one single, long one.

I didn’t come across any obvious errors or grammatical breakdowns, though I imagine a more diligent reader might discover one or two.

Features
The thing about the Fifth Doctor period from a gaming perspective is the business of companion overload. Whereas more recent and older iterations of the Doctor had one or two companions, the Fifth Doctor adopted something of an open house strategy with three or four at times. Like previous Sourcebooks in the series, the book kicks off with general themes appropriate to the adventures of this period – and this crowded TARDIS situation comes out strongly. If any GM wants to run adventures with a lot of players, then the stories in the Peter Davison period will certainly do the trick.

The initial sections provide a view of the key differences between the Fifth and earlier Doctors. The youth of the character, the many companions, the continued shift away from UNIT – they all factor into making this a period with clear differentiation from what had gone before. The Doctor also kicked off with a serious case of post-regeneration weakness and relied heavily on his companions for physical assistance. Even once recovered, he gave a lot more time and responsibility to his companions, who ran the range from annoying teenage brainboxes to to ballsy female stereotypes (in both Tegan and Peri).

After the introduction, the book delivers individual stories in a form which should now be familiar to anyone who has dipped into the earlier books of the series. Each story starts with a synopsis of the episode, then drills down into the themes, continuity, personalities, interactions, arcs, gadgets and other key elements. The post-synopsis discussion considers the general types of stories explored and how a GM might either replay the whole thing or use elements to colour their own adventures. Each story then closes out with a short section of suggestions about how the players might encounter the aftermath of a tale, or perhaps even interact with characters prior to the events experienced by The Doctor.

Anyone who has read the previous Sourcebooks will notice immediately that each synopsis runs longer than those that have come before – maybe a page or so longer than any in the previous books. The page count overall runs about the same, but with fewer stories to cover, each has a greater level of synopsis detail. In truth, this is no bad thing. Even though I watched each and every one of these episodes, I enjoyed reading through them and recalling the events covered. For anyone not born at the time, each synopsis will be completely new – especially if the reader hasn’t even seen the episodes released by the BBC on disc.

Because of the varied factors of characters, actors, time period, writers, budget and directors, stories in the Fifth Doctor period varied substantially from those that had come before – meaning that the material doesn’t feel like a retread. Despite four other Doctor Who Sourcebooks sitting out there already, nothing here felt tired or worn out. The writers of these Sourcebooks each bring their own style and content, and having read them all thus far, I have no grown bored or disillusioned. I can see that the rich potential of the series itself has carried over into the potential for these Sourcebooks.

The companion-heavy stories mean that the writers gets a chance to cover thorny issues like missing players, the spread of action across a large group, and the murky waters of character death (in the demise of poor Adric).

Final Thoughts
The Fifth Doctor enjoyed a mix of adventures that harked back to those who came before, running the range from historical what-ifs through through deep space encounters to the returning menace of favourites like the Daleks, Cybermen, Silurians, and The Master. In many ways, this mix of factors make this Sourcebook an interesting potential drop-in point for anyone who hasn’t tried one of the books thus far, especially those who have little prior knowledge of the ‘classic’ Doctors.

From short encounters – like The Black Orchid – to overarching plots – like the machinations of The Black Guardian, the stories of the period present fine source material for a GM wanting to run adventures in the Whoniverse for the first time. Combined with the extended synopsis material, each story presented here in The Fifth Doctor Sourcebook has the potential to serve as the jump off point of relatively low prep games – while, for the more experienced GM or Who fan, the Sourcebook delivers plenty of new material and a continued stream of characters, traits and gadgets.

Another good book – and continued enthusiasm from me as a gamer and reader to see what comes next.

My copy was provided for review. Doctor Who: The Fifth Doctor Sourcebook, Walt Ciechanowski, Darren Watts, Cubicle 7, $19.99 in PDF.

How does the celery help?: A Review of The Fifth Doctor Sourcebook

Online Shows Support the Undying and back a zombie love story

Comics Die with superpowers: A review of Death Sentence
💰 Copper Coins 💰 Geek Native is an affiliate and may earn commission on purchases you make from third-party sites.
🍪 Privacy & Cookies 🍪 The site uses cookies to survive. By accessing the site, you agree to use your browser to control cookie use or take 1d4-3 privacy damage (tracking). If you defeat cookies via ad blocking, please consider the Patreon. An intro to cookies, and how to control them, can be found here.
I Manage Cookies