Corporia is a RPG in the Kickstarter funding stage from author Mark Plemmons. He has worked on projects like HackMaster, Kingdoms of Kalamar, Dungeons & Dragons and Knights of the Dinner Table.

In this post we enjoy an exclusive look at a Corporia sorcerer and a brief but insightful with Mark. 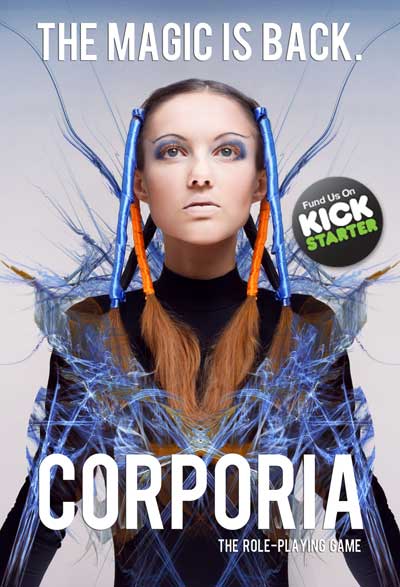 Why did you dump traditional illustration for photographs for the Corporia RPG?

I wouldn’t say I “dumped” it, exactly. I love illustration work, and there are a handful of non-photographic pieces in Corporia, but I wanted to evoke a sense of modern design. Illustrations can evoke a very ‘old-school’ feel, but combining photographs with a layout that’s more magazine than instructional book gives it a striking look.

Should other publishers have been brave enough to do the same thing?

Well, if they had, then Corporia wouldn’t stand out as much, so I’m glad that’s not the case! Seriously, though, it’s all about what the designer wants in the product. I don’t think there’s anything inherently brave about using either illustrations or photographs – it’s purely a matter of personal preference.

The Kickstarter press pack for the game includes photos that show naked flesh. Are they representative of Corporia’s final content? Wisely clever marketing in this Kickstarter competitive age?

Hmmmm, maybe the press pack just reveals part of my subconscious! I did pick those because they were striking images that would grab people’s attention, but I didn’t intend their ‘flesh’ to be representative of Corporia as a whole. Actually, out of Corporia’s 208 pages and dozens of photos, I can think of only two that hint at showing the female nipple (and both of those are monsters), plus one that features a mostly-bare female leg showing off a combination of medieval armor and modern high heels. Compared to Corporia, there’s a lot more nudity in the old D&D Monster Manuals! In fact, I intentionally used models in realistic clothing to avoid sexualizing the characters.

Should more RPGs position themselves for more mature and adult readers?

I wouldn’t state that as a blanket recommendation for the industry, but I don’t think designers should be afraid of doing so, if it’s appropriate for the product. Of course, exactly what crosses the ‘mature’ line depends both on the designer’s intent and the mindset of the reader. For instance, Corporia discusses substance augments (aka designer drugs) that provide a temporary boost to certain abilities, usually at the risk of addiction or other harmful effects. This is a common trope in science-fiction, especially in the cyberpunk genre, but some people may feel that putting any drugs into a game is inappropriate. Because of that, I considered leaving designer drugs out of the game entirely, but it felt like I’d be betraying my ‘artistic integrity’, if you’ll pardon the phrase.

You could have brought the Knights of Camelot forward to any point in time? What’s the rational behind the near-future Corporia setting?

A common theme in Arthurian fiction is that King Arthur will return at the time of the people’s greatest need. That, combined with my love of cyberpunk, was what inspired me to have the knights return in a mega-corporate dominated future, but another later inspiration was the Occupy Wall Street movement. The near-future of the Corporia setting grew out of a fictionalized ‘what if’ version of that movement, where riots led to sympathies turning against the protestors, and the corporations gaining increasingly more control and eventually privatizing the government.

What do you want roleplayers to take away from a night of Corporia gaming? What’s the standout experience of the game?

In the end, I want everyone to just have fun! The genre-blending of suits and swords, magic and machines, and Camelot and corporate, allows for really unique adventures that you won’t find anywhere else. And if they ever want a change from urban fantasy, Corporia allows the Hacker characters to bring their allies along when they dive into virtual worlds, providing an infinite variety of any genres you can imagine. 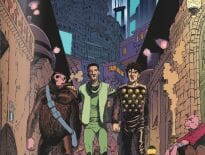 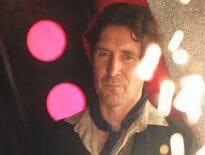