You are here: Home / Games / Tabletop & RPGs / The pitch for the Accursed RPG: monsters as heroes

Authors John Dunn, Jason Marker and Ross Watson have teamed up to work on the Accursed RPG. This is a Savage Worlds game in which darkness has won and the only ones left to fight back are monsters.

The Witches have ruled the land but their grand union has split. Now former shock troops, the Accursed with Witchmarks burned into their flesh and souls, are unable to return to their former lives but able to battle against the Witches. 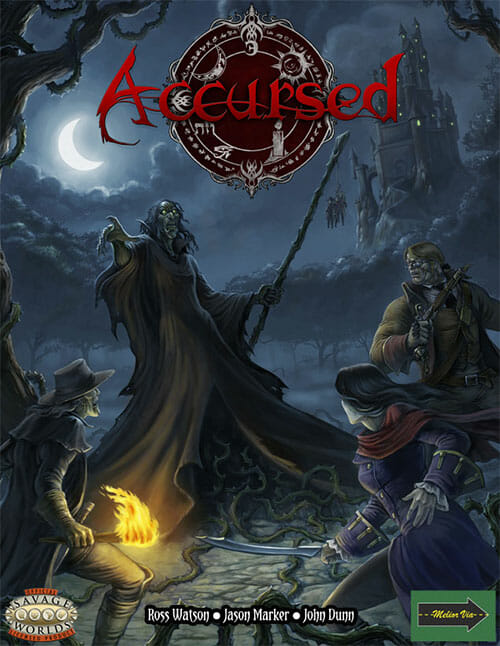 The smallest pledge option is $10. That gets you access to the Accursed Player’s Guide for Savage Worlds in PDF form. If you think you might GM the game then step up to the $20 mark for the PDF copy of Accursed for Savage Worlds.

If they hit $10,000 then Sean Patrick Fannon of Evil Beagle, creator of Shaintar, creates an ebook adventure. I wonder if there’s a mistake on the price there as $10,000 isn’t a stretch goal; it’s the goal. Equally, a separate line suggests $10,000 also unlocks Rich Baker, of Primeval Thule, who’ll write another ebook adventure. Perhaps these aren’t mistakes. Perhaps this is a way to get names to associate with the project – but only if it’s a success. In fact, the remaining three stretches are described as funded +$2,000 and so on, so there’s reason to believe Accursed really is using a form of immediately unlocked on funding goal.

The three authors say they’ve got stretch goals planned up to $100,000 should the campaign do well enough.

That’s not a mistake on the $10,000 stretch goals. We worked with Sean Patrick Fannon and Rich Baker on stretch goals for their respective Shaintar and Primeval Thule projects. In return, they agreed to create adventures for us if we funded. So, yes, we’ll have two stretch goals unlocked at the same time as we fund the main project.

Thanks for the clarification. Good to have those two involved and interesting to see the “on success unlock” in place.

The pitch for the Accursed RPG: monsters as heroes