You are here: Home / Movies / Who is Ultron in Avengers: Age of Ultron?

Joss Whedon has announced that the next Avengers film will be out in the summer of 2015 and will be called Age of Ultron. That’s great but who is Ultron?

Marvel have just completed a comic book series called Age of Ultron and I’ll admit that I stopped reading after just one. It didn’t grab me. The good news is that Ultron is a far more established character than the 2013 run.

Ultron first appears in the Avengers comic book in 1968. He is disguised as the Crimson Cowl and tries to use his creation Vision to destroy them. In the end Vision, with the aid of the Avengers, appears able to fight off Ultron. Vision is an android and it turns out so is Ultron.

It takes a while for Ultron’s backstory to be fully complete and in the original comic books we only learn it through flashbacks. He was created by Henry Pym, using the genius’ own brain patterns as his own. Ultron develops his own intelligence and ambitions and keeps on re-inventing himself. By the 1990s we’re up to Ultron-16.

Ultron is a dangerous, self-improving, android created by Henry Pym. Henry Pym is the scientist who becomes Ant-Man. That’s right, this is the same Ant-Man we’re expecting Edgar Wright to take to the big screen and since The World’s End project is over Wright must be well on with the script.

We’ll just have to see what Whedon’s decision means for the Ant-Man movie.

I just hope this isn’t the fourth movie where Tony Stark fights an enemy he helped create.

Who is Ultron in Avengers: Age of Ultron? 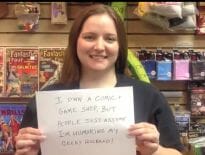 Music Nothing to Prove – Geek Girls and The Double…