You are here: Home / GameWyrd / Echoes from the Wyrd / RPG Previews: Island of the Damned | Echoes #15

Island of the Damned

The player-characters, enjoying the fruits of their labor in a raucous portside inn, are approached by a messenger who tells them that his employer, Captain Bobo, wishes to hire their vessel. The messenger pays the character’s tab at the inn, and then some, with a pouch of gold doubloons.

Meeting with the Captain, the players discover that their mysterious benefactor is, in fact, a monkey–a pirate captain cursed by a powerful bokor. He wants to hire the player-character’s ship to take him to Isla de los Maldecidos–the Island of the Damned. 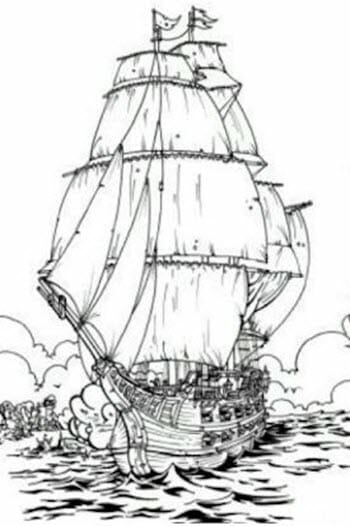 Bobo tells the PCs that he buried a massive haul of booty on the island–an island that only he can find. Soon afterwards, he was cursed by a bokor,and his crew mutineed, unwilling to follow a monkey. He was marooned with a few of his loyal crew, but he escaped–and now wants to get back to Isla de los Maldecidos, to retreive the treasure before his old crewmates are able to break the codes in his log book and determine the location for themselves. He is willing to share the treasure with the player-characters 70/30 –he will keep 70% of the haul in order to acquire and outfit a new ship and crew, and the PCs will earn 30% for simply taking him and his men to the island.

What Bobo isn’t telling the PCs is that the treasure on the island isn’t his, but rather the property of the bokor who cursed him, and is crawling with zombis–members of Bobo’s crew, among others.

Bobo wants to travel to the island, and retrieve the magical container which stores his crew’s gros-bon-anges, thereby removing them from the bokor’s thrall, and placing them under his power–at which point he will attempt to take over the PC’s ship, and return to his life of piracy upon the open seas, leaving the PCs marooned on Isla de los Maldecidos to face the wrath of the bokor.

“You’re in a tavern, drinking…” You’d be surprised how many real-world adventures started that way…

The player-characters (PCs) are drinking in a port-side tavern (the location can be of the GM’s choosing), freely spending the ill-gotten fruits of their labor, when they are approached by a man who identifies himself as a messenger (use the sample statistics for the “Underworld Lackey” on page 139 of Skull & Bones).

The messenger tells the PCs that he is a representative of Captain Bobo (he pronounces the name with the accent on the second syllable, like an African name). The Captain wishes to speak to the PCs about hiring their vessel. He assures the PCs that the offer is a lucrative one, and, to demonstrate, he pulls out a small pouch of gold doubloons, and tosses it to the innkeeper, more than paying for the PC’s tab at the tavern. He asks that the PCs follow him to a rooming house where the Captain will meet them.

He will make no effort to coerce the PCs through violence or other skullduggery– if the PCs do not wish to accompany the messenger, or take the Captain up on his offer, the adventure is over– althoughBobo may cross paths with the PCs again at some point.

The messenger takes the characters to a run-down boarding house on the quayside, frequented by seamen inbetween journeys. They are ushered to an upstairs room, where they seea large African man with ritual scars, standing with a monkey on his shoulder. If they attempt to talk to the man, he mutely shakes his head and points to the monkey. Suddenly, the monkey speaks! “Aye, I’m a monkey. I’m the one in charge here, though…and ye’d best not be forgettin’.” 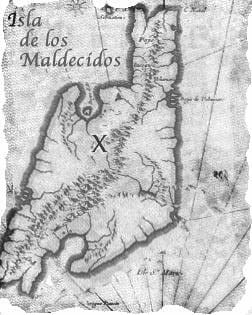 Horse stands impassively while Bobo speaks to the PCs. Bobo will tell them that he was cursed by a powerful bokor (he won’t say who unless directly asked), and that soon afterwards, his crew mutineed, because he lost their respect when he was transformed into “a blasted monkey.” His old crewmates marooned him along with a handful of the crew that remained loyal. He tells the PCs that he and the loyal crew escaped, and now they need a ship to carry them to the location of his buried treasure. He claims that the treasure is buried on an island that only he knew the location of–an island called Isla de los Maldecidos (allow characters who speak Spanish to realize that means “Island of the Damned”). He wants to get to the island and remove the treasure before his old crew manages to decipher the codes in his log-book, which they still have.

Bobo says that the treasure is the haul of a lifetime–worth over 100,000 doubloons. He will “negotiate” with the PCs–his initial offer will be 10% of the booty, just for bringing his party to the island, but he will “allow himself” to be talked into as much as 30% …after all, he has no intention of sharing the treasure with the PCs.

Bobo is willing to give the PCs some payment up front, if they demand it. He and his men have 500 doubloons at their disposal, and will give it all to the PCs, since they know they will just be stealing it back when they take the PCs ship. He urges the PCs that time is of the essence–claiming that they’re just a few steps ahead of his treacherous former crewmates. The players, at this point, should probably be expecting a “chase” adventure–rushing to the island, and lifting the treasure before the arrival of the other pirates. They should get under way immediately. Bobo will provide the course to their navigator.

In addition to Horse, Captain Bobo has 7 men with him (the pirates who were with him on the ship’s boat when they ran from Domino):

Echoes from the Wyrd RPG Previews: Blood and Vigilance | Echoes #15