You are here: Home / GameWyrd / Echoes from the Wyrd / RPG Previews: A Question of Loyalty: A Guidebook to Military Orders | Echoes #15

A Question of Loyalty: A Guidebook to Military Orders

You can download a 8-paged PDF of A Question of Loyalty at the end of this page. The following is just a small sample.

What is a class template?

For instance, the advancement chart of a paladin with the Brotherhood of the Temple of Solomon class template would look like this:

Class templates have minor requirements, much like prestige classes, that must be met before attaching a class template to a character and all require ments can usually be attained while creating a character.

What are the other costs?

The class template presented in this preview and other future products give you a level adjustment much like a monster template or when playing a monster or advanced race (see DMG Chapter 6: Characters).

What are the benefits to having a class template?

Class templates allow you to expand your core character concept without having to choose alternative classes or they allow you to integrate and expand with supplements presenting alternative character classes. Also, besides the special abilities, they allow players to access special feats restricted only to certain members of the order as well as gaining bonus class skills.

What is the purpose of the class template?

This preview provides a perfect example how a class template can effect your game or character. Military orders flourished in the middle ages as knights enlisted to further the religious causes during the crusades. However, when designing the various knight prestige classes in A Question of Honor: A Guidebook to Knights, there was always the realization that knights were not the only members that existed in a military order. There were sergeant-brothers (soldiers whom could not become a knight for lack of a noble birth), turcopoles (local troops that fought along side of order knights), scouts, as well as other lesser positions to make the order run properly. In a fantasy game, especially, a ranger or fighter may join an order to scout for the cause and receive benefits that belonging to an institution might provide without having to have a knightly prestige class.

In other aspects, such as guilds, provide an ample opportunity to reap the benefits a class template offers. Fighters often join thief guilds, though not swift, they provide the muscle as guards and extortion operatives. Mage guilds also attract rogues, loyal to the cause, to steal magical knowledge from rivals. What best way to employ those with tasks, whom are skilled in their trade and loyal to the guild or order.

Also, in designing the class template, it allows a player freedom of choice. They are not restricted to playing a “concept” or alternative character class, nor do they have the frustration to choose between multiple prestige classes, or even the complexities and slow advancement of multiclassing.

On a final note, belonging to a guild or an order should mean more than paying dues, adventure hooks, or possible role-playing opportunities it may provide. This allows the player to become enmeshed in the order, reap the rewards for belonging to something bigger them themselves, and visibly see the impact belonging to an institution imparts.

The feats presented below represent the benefits of belonging to a military order and expand upon the limitless possibilities of a class template. Three of these feats are possible to use with this preview, while one: Divine Physician, offers only a glimpse of what a character can achieve by belonging to the Knights of St. John military order.

You intuition guides your strike.
Prerequisite: Knightly Order class ability (Temple of Solomon), Wis 13+.
Benefit: You may cast true strike once per day as a spell-like ability.
Special: You can gain this feat multiple times. Each time you take the feat, you increase the amount you may use it one additional time per day.

You awakened your inner eye.
Prerequisite: Insight, Knightly Order class ability (Temple of Solomon).
Benefit: Once per day, you gain blindsight 30 ft. as a supernatural ability for a number of rounds equal to your Wisdom modifier.

You command a small unit of men.
Prerequisite: Knightly Order class ability (any), Profession (soldier) 7 ranks, Chr 13+.
Benefit: You are considered to have a modified leadership score of 10 and gain warrior followers accordingly. Though these men are under your command, they begin as indifferent (see Player’s Handbook Chapter 4: Skill for further details) and are completely loyal to the principals of the order. This is in addition to any other followers you may have acquired.

These followers do not require upkeep or equipment costs since that is taken care of through funding by the order. Also, if you wish to equip them beyond their normal arms and attire, you may do so at your own cost. In addition, all equipment belongs to the order and may not be sold or traded without the permission of the Drapier (or another higher authority).

Upon the death or dismissal of a follower, all equipment must be returned to the order. Furthermore, lost followers are replaced in a week.
Note: This feat does not grant cohorts or followers other than from the warrior NPC class. However, at the discretion of the game master, you may use the pre-made knight followers presented in A Question of Honor: A Guidebook to Knights.

RPG Previews: A Question of Loyalty: A Guidebook to Military Orders | Echoes #15 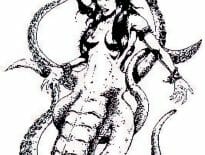 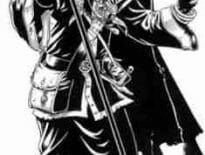