You are here: Home / GameWyrd / Echoes from the Wyrd / RPG Previews: The Lords of the Night: Liches | Echoes #15

The Lords of the Night: Liches

You can download a 4-paged PDF of Lords of the Night: Liches at the end of this page. The following is just a small sample.

“This is a journey of great sacrifice; life force in exchange for enlightenment…”

A Lich State is the evolutionary level of an Arcane Lich. Beginning with Death Touched and ending with Spectral, it is a general indication of the age and power of a Lich. Liches of different States take very different physical forms; some look almost human while others are nothing but bleached bones and gleaming eye sockets.

A Lich may advance their State by casting the next Arcane Ritual in the sequence. Casting the wrong Ritual has absolutely no effect whatsoever (although the Ritual is performed and all materials expended). A Lich can advance naturally between States, but to do so can take years, decades, or even centuries and is wholly dependant on the power and wisdom of the Lich. Evil Liches, or those wholly concerned with self and power advance much more slowly than other, more neutral Arcane Liches.

The Lich Types were created by the Guild of Wizards and represent seven very different Orders of differing powers and personal beliefs. Joining one of the Orders requires a Binding ritual performed by any high-ranking member of that Order. While this does not need to be done in Kethak, the Conclave are careful about accepting new members and competition is harsh. A Lich may be Bound to an Order from their Death Touched State providing they have a Mentor (see p. 105). Once a Lich is Bound to an Order, it is permanent. A mortal or Lich that has not yet been bound to an Order has no Type or powers beyond those enjoyed through State. Known as Unbound Liches, those of Sunken Lich State and beyond are considered weak and inferior, outcasts by Lich society and the Conclave. The Lich Types start with Artifex and end with Umbral Lich and begin on p. 30.

The Ritual Of The Arcane Displacement – Living Dead

“I stand on the threshold of life and death. My mind is alive with possibility…”

There is something distinctly unnatural about the Living Dead. They have taken a great stride into undeath and have given up much of their mortality in exchange for greater knowledge of the Arcane. They carry the stale air of death about them wherever they go. 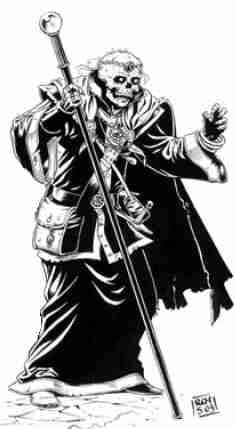 Appearance: The flesh of the Living Dead takes on the color of porcelain. They appear gaunt and desperately emaciated. Straddling the border between life and death the Living Dead have shadowy eyes that gleam eerily in darkness. They seem to breathe very slowly and deeply. Features are tinted with green or blue and lips (when they have any color) take on a deep sapphire hue.

The Living Dead have lightly veined faces and almost skeletal hands. They have very little flesh on their bodies and even the most corpulent of individuals will have slimmed down to a mere shadow of their former selves. They eat little and quickly grow tired when exerting themselves. Bodily functions have all but stopped; hair and nail growth slowed to a fraction. For more information on the appearance of the Living Dead that have been bound to a Lich Order, see Physical Transformation, p. 20.

Living Dead characters sleep in a comatose state on the very edge of death. They are easily confused for corpses in this condition. They rarely dream and many suffer from waking hallucinations as a result.

Society: The Living Dead are less numerous than the Death Touched, yet countless numbers exist in Chapters across the mortal realms or in Kethak where they study hard to increase their knowledge. Many go on quests to increase their power in an attempt to cast the next Ritual where they may finally become reborn as Arcane Liches.

Personality: The Living Dead are deeply affected by the forces of Arcane and necromantic energy that flow through them. Many grow distanced from their mortality, mind and body twisted by the Arcane into new and often inhuman forms.

Lifespan: The Living Dead age fifty percent more slowly than mortals. At the end of their extended lives they simply pass naturally into death and are forgotten by the universe.

Role Playing the Living Dead: You are Living Dead; you fit neither in the world of the living nor the realm of the dead. You have sacrificed much of your mortality in search of knowledge and power and you have been given a choice: to continue down the Arcane path, or to remain in safety, certain that you will live out the rest of your days, barely more than a scrap of life with just enough breath to see you through each day. Life or undeath, whatever you decide, the Void will always be searching and the greatest powers will lie just beyond your reach…

Creating a Living Dead Character: A Living Dead character has all the base character’s statistics and special abilities except as noted here.

Type: The character’s type changes to Living Dead. Do not recalculate base attack bonus, saves or skill points.

Speed: Same as the base character.

Attack: Saves against Living Dead characters have a DC of 10 + Half HD + Intelligence modifier unless noted otherwise.

Special Qualities: A Living Dead character retains all the base creature’s special qualities and gains those described below.

"Wait! I got a spell for that!"
Echoes from the Wyrd

RPG Previews: The Lords of the Night: Liches | Echoes #15