You are here: Home / GameWyrd / Echoes from the Wyrd / RPG Previews: Victoriana | Echoes #10

You can download a 4-paged PDF preview at the end of this page. The following text and illustration is a sample from the preview. 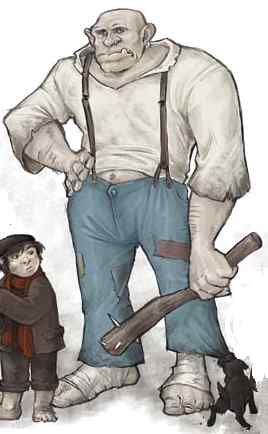 The world of Victoriana is not purely populated by Humanity, across the world dozens of different races carve their fortunes alongside (or against) mankind.

In Europe many of these races have lived together in society since Roman times, and rarely consider themselves different races – simply a part of ‘the greater concept of man’. A far greater distinction for the inhabitants of Victoriana is ‘class’ the true and sure knowledge that birthright and breeding define an individual’s place in the world.

In England this has led to certain races becoming dominant (or downright entrenched) in certain classes. The Eldren dominate the upper classes, the industrious dwarves and ingenious Gnomes populate the middle class, while the gullible Ogres and downtrodden Beastmen lie among the lower classes. Humans can of course be found across the spectrum of society, comprising the single largest majority of each class.

Men
Men are the most populous of all the races and account for the vast majority of Europe’s population. They vary greatly in build, have many possible hair and eye colours, but they have no special racial abilities. Women are socially bound in England but there is no difference in their attributes, women are certainly as capable as men – society simply refuses them the same opportunities.

Beastmen
Beastmen have faithfully served among the lower classes of England through out history, Beastmen appear next to men on the earliest discovered cave paintings. A Beastman’s build varies in the same way as a Human. Their bestial features vary to a degree, although most have a goat or dog-like head and heavy body hair. Variations are common – ratmen, bearmen. Lionmen etc. The bestial appearance should be chosen after the attributes have been rolled. For example a small, dextrous and weak Beastmen might have rat features. For example a large, strong, stupid Beastman may have bulllike features. A Beastman who is both strong and intelligent could well be a lion. Beastmen do have females but they only account for approximately 25% of the Beastman population. It is more common for Beastmen to intermarry and breed with men and Eldren, a practice which society does not view distastefully among the lower classes. Beastmen are often judged by their outward appearance. A rat or weasel would live a lonely shunned life, while a noble lion would be popular and possibly be propositioned often by the other races.

Due to their slightly subservient social position (it is very rare to find a Beastman above the lower classes and unheard of to find one in the upper class) many are turning to politics such as socialism, bolshevism, communism or plain anarchy in attempts to better their position.

Eldren
The Eldren are a rare and aesthetic race (although those that turn to war often excel), highly valued as artisans throughout the world. Not only creators of beauty, the physical beauty of the Eldren is also legendary; they are tall and slight of build, finely boned and with delicate features. Their skin is pale as finest porcelain, their hair raven black or mahogany with no other variation. Eldren eyes have cat-like pupils and white or pale metallic irises, their ears come to a delicate point at the tip. In high society an Eldren bride is considered quite a prize. The Eldren have lived with, and interbred with the upper echelons of Humanity for all recorded time. (Queen Elizabeth Tudor was an Eldren queen) like Beastmen, the Eldren are rarely considered to be a different race.

Eldren have a high chance of insanity, or “artistic eccentricity” as it is known, typically this manifests as a minor neurosis or phobia. All Eldren characters must take a mental complication from the option points section without claiming the bonus points that would normally be associated for the complication. 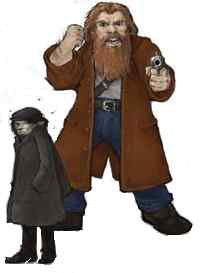 Dwarves
A very clannish race, the Dwarves kept their northern cities and large tracts of the land around them under guard from other races throughout much of history. Despite this theyhave always been peaceably minded to other races, but only really started integrating when queen Elizabeth asked for their help to defeat the armada. The English civil war strengthened these ties when king Charles the first (again an Eldren monarch) was wiped away by Oliver Cromwell and the Dwarven sir Thomas Fairfax’s new model army. Dwarves are stocky, and powerfully muscled. They have finely lined faces and the colour of their eyes is always deep and bright. Dwarven hair can be any Human colour; it is coarse and grows thickly on the scalp and race. Dwarves are hard-working industrialists, and make up a large part of the gentry and skilled labour in many towns where mining and building are primary industries. Unsurprisingly after the industrial revolution, large parts of the nouveau riche are Dwarves.

Dwarves suffer from legendary stubbornness. In England They often harbour bad feelings toward Eldren from the English civil war – over two centuries ago.

Little legs
Dwarves are a short race, and as such their legs are much shorter than the average Human (or Eldren or Beastman for that matter). When calculating movement speeds ½ your scores to represent the disadvantage represented by your little legs.

Halflings
Halflings are a transient people who take great pleasure in food and drink, tall stories and a warm fire. They are short and although they are a slender race, there excesses often leave them portly. They have tough hairy feet and few wear shoes. Hair can be any colour, as can eyes. Halflings mature quickly and have a short life span, they are considered adult at 10 and the oldest recorded hauling lived until 45. Halflings are all (as a race world-over) afflicted with an almost insane wanderlust. A hauling is always on the move from birth till death. On the whole Halflings are a cheerful and curious lot, rarely without their noses in somebody else’s business or wallet. Halflings have little concern with all this ‘society’ nonsense; most find it quite amusing, for this reason society places them (as a race) at the bottom of the lower class.

Wanderlust
A Halfling cannot stay in one place for long; after his intellect in months passes, he must move on to a new location. he does not then for every week thereafter then he temporarily loses 1 resolution or 1 intellect until he does. Once on the move again the characteristic scores return at the rate of 1/day. At the gamesmaster’s discretion the distance travelled may be of any distance, and locations may be revisited.

Little legs
Halflings are a short race, and their speeds are calculated in the same manner as Dwarves.

Gnomes
Gnomes are short wiry humanoids, easily mistaken for a starved Dwarf. Hair can be any colour as can eyes. Their faces are lined like a man in middle age, a Gnome’s eyes are dark and sparkle with intelligence. Gnomes are generally shrewd, intelligent creatures they are at their best when taxing their brains. Accountant, teacher and solicitor are all occupations at which the humble Gnome excels. Being physically frail they shy away from physical work when they can.

Little legs
Gnomes are a short race, and their speeds are calculated in the same manner as Dwarves. 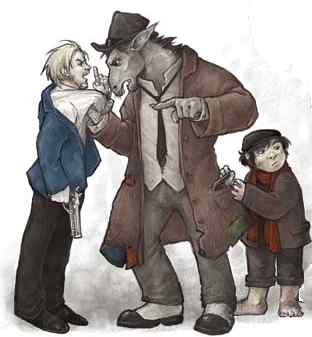 Ogres
The Ogre is a humanoid powerhouse. On average 8 ft. Tall and almost as wide, an Ogre is best described as a large slab of pure muscle. Ogres may have any colour hair or eyes; their skin is rough and callused all over. Often the teeth are overdeveloped into tusks (approx. 45%), facial features are always very deep set & crude.

Ogres are dumb, they frequently believe anything they are told as they lack the facility to distinguish lies from truth, this often leads to fanatical (and misplaced) devotion to even obscure causes, a fact that the army plays on with glee. Indeed, Ogres are ruthlessly taken advantage of due to their dubious intelligence and aside from the occasional rabble rousers- nobody (including the Ogres) cares about how they are treated.

Blunt wits
If you choose an Ogre character, you automatically believe anything those characters with a presence score higher than 5 tell you. If there are two high presence characters voicing different commands then they must shout each other down to end your confusion, or the gamesmaster might make you roll intellect + empathy to make your own judgement call (heaven help us) on which of the nice people is telling the truth.

Iron constitution
Ogres are renowned for their ability to shrug off wounds and pain. To represent this every Ogre calculates his health as body x6 rather than the body x5 as used by the other races. 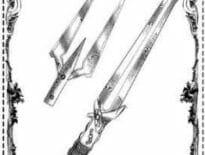