A full colour, 7-paged, B5 preview can be downloaded at the end of this page. The following text and illustrations are just a sample.

All Alone in the Night
The Babylon 5 diplomatic station is a city in space, located within neutral territory in orbit around Epsilon 3, a desolate and uninhabited planet. Designed as a political meeting place for all races of the galaxy, its goal is to prevent war through negotiation, compromise and the active promotion of peace. However, it is also a vibrant and rich marketplace, attracting traders and merchants from hundreds of worlds to meet and do business. Babylon 5’s success has ensured its place in the galaxy, as a centre for alien races to meet, engage in politics and further understanding between them.

As implied by its name, Babylon 5 is the fifth space station spawned by the Babylon Project, all of which were constructed after the Earth/ Minbari War in order to avoid such confl icts taking place in the future. Babylon 1, 2 and 3 (the first was actually called the Babylon Station) were destroyed during construction, either through structural failure or sabotage by terrorists opposed to humans forming closer relationships with alien governments. Babylon 4 simply disappeared without trace twenty-four hours after it went on line and its fate remains one of the galaxy’s greatest mysteries. EarthGov initially resisted efforts by certain senators to fund a fifth station after the disappearance of Babylon 4 as the entire project seemed ill-fated, with many humans beginning to believe in the ‘Babylon Curse’. However, the goals of the Babylon Project were still worthwhile and, many felt, more needed than ever. Diplomacy among the major races of the galaxy, including the Minbari, acquired additional funding so Earth would not have to bear all costs of construction alone and so Babylon 5 was finally approved and built in the same system its predecessor, though in orbit around another planet, Epsilon 3. 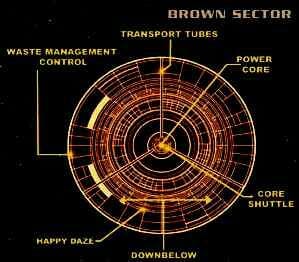 Few believed Babylon 5 would share any greater success than the previous stations but, against all odds, it went online in late 2257. Already, the station has experienced disasters and potentially explosive diplomatic situations, including a threatened attack by an entire Vorlon war fleet in retaliation for the attempted assassination of their first ambassador, Kosh. Led by Commander Sinclair and supported by the ambassadors of many governments, the station personnel on board Babylon 5 have proved to be dedicated to their task and, thus far, have cleanly dealt with every emergency situation they have faced. Back on Earth, many still doubt Babylon 5 will survive long, and will soon be claimed by either destruction or financial cutbacks made by a government already pouring billions of credits into other avenues of space exploration. As the station enters the year 2258, it is set to face many more trials in its mission of peace.

Arriving on Babylon 5
With an average of fi fty to one hundred ships arriving every day through the jumpgate, all bringing visitors and cargo, Babylon 5 is a hub for diplomats and traders. On any given day, the station is a thriving and bustling environment, with visitors constantly streaming through customs, bargaining in the Zocalo or taking advantage of the multitude of facilities available on board Babylon 5.

Whether arriving by shuttle from a large space liner or warship, or travelling on board a smaller spacecraft, a visitor will enter Babylon 5 through the Docking Portal and proceed through the Central Docking Hub that links sixty pressured holding bays to space outside. From here, any cargo is unloaded by the army of dock workers living on the station while passengers disembark and make their way through customs, monitored by EarthForce security teams. Once identified and scanned for weapons or other illegal goods, the visitor is now free to travel through the station though certain areas, particularly in Blue and Green Sector, remain off-limits to unauthorised personnel. This still leaves many areas to explore, with hotels, bars, casinos and shops all supporting a thriving leisure industry on Babylon 5. Few visitors stay long, as space travel can be incredibly expensive, with most arriving and then departing with business complete within just a few days. There are few permanent residents on Babylon 5 aside from station personnel and lurkers in Downbelow who have no money to leave the station anyway.

The vast majority of personnel on the station are human, though aliens can also find work in civilian areas, often in business and diplomatic areas such as translation, information gathering and menial tasks. Though operated by EarthForce, most of the eight thousand personnel are actually civilian contractors, performing the myriad of tasks vital to keeping the station functional, including unloading cargo, sanitation, maintenance and food preparation. More sensitive or vital duties, such as weapons technicians, command staff and security are all EarthForce, however. 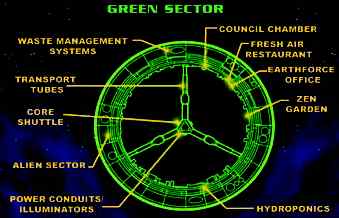 The Command Staff
The most senior EarthForce officers on board Babylon 5 form the Command Staff, and have become well known personalities because of both their position and actions since the station went on line. In overall command is Commander Jeffrey Sinclair, a surprisingly junior rank for such an important position on board a diplomatic station. He is assisted on station operations by Lieutenant Commander Susan Ivanova, a bright and extremely capable first officer from the Russian Consortium. The immediate Command Staff is rounded off by Chief of Security Michael Garibaldi and Chief of Medical Staff Dr Stephen Franklin. Technically, their immediate aides are also considered part of the Command Staff, but together these four have final authority on Babylon 5 and have become well respected by those serving beneath them.

Dockers’ Guild
By far the largest workers’ union on board Babylon 5, over 1,500 dockers belong to the guild, headed by their foreman Neeoma Connoly (see p213). Bound by government contract and forbidden by law to strike, despite being civilians, relations between the Dockers’ Guild and the Command Staff have always been strained as financial cutbacks from EarthGov have consistently cut into the dock working budgets. Life has become hard for the workers and though they are considered an essential component of Babylon 5, being responsible for the loading and unloading of all the cargo that passes through the station, they are understaffed and over-scheduled to the extreme. Miss Connoly has warned that an accident is bound to happen soon, citing the fatigue her workers are constantly experiencing and the poor quality of dockside equipment. Commander Sinclair is sympathetic to her wishes but is in no better position to alter the station’s budget than she is.

Transport Association
Steadily growing in membership, the Transport Association is a collection of freelance pilots and ship captains who have grouped together to form an ad hoc union in order to gain a better bargaining position against EarthForce directives. In reality, the Transport Association has little real power, as members have too many interests of their present on Io in December, whether in EarthForce or as private citizens, they would be advised to clean up any operations currently being conducted under the radar, so to speak, as Lianna will be ruthless in her pursuit of presidential security, leaving no stone unturned with respect to potential threats – unfortunately, she has a good nose for problems and will happily inform Io’s security teams to deal with any wrong-doing she discovers.

The plot to assassinate President Santiago is a good one to get the players involved with if they are serving the Earth Alliance in any way, though it is recommended that they never know exactly what tasks they are performing in order to make the assassination a reality. They may be called to ferry various people and equipment from one part of the galaxy to another, or relay information. It should never be obvious that there is a link to any treasonous activities and, in fact, the Games Master can go to great lengths to hide a connection. However, at the end of 2258, there should be some event of piece of information that comes to the players (perhaps via an ISN broadcast) that hammers home the fact that they were, unwittingly, part of the overall plot. Fortunately, the official explanation of an overloaded fusion reactor in EarthForce One will mean that there will be few, if any, investigations. However, the players may find themselves targeted by EarthForce special agents eager to keep the plot secret, especially if they begin talking to the wrong people about their suspicions. . . 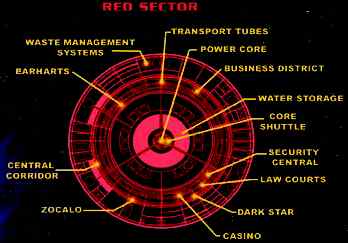 Lurkers being hired to perform various tasks by those wishing to avoid official scrutiny is nothing new, and Petrov is by no means the first to have fallen foul of seeing or hearing too much. Players living in Downbelow may have many opportunities to earn a few extra credits unloading cargo from arriving ships or performing other errands – perhaps following an ambassador or other important individual, keeping track of security team patrols or flat out stealing treasured items. However, this may bring them into conflict with station security, the targets of their illegal activities, and even their employers, if the job turns sour or absolute secrecy is required. The Games Master can insert any number of scenarios into his campaign through this method, bringing players back on track to his main story arcs, or just providing some lighter and unrelated scenarios within a full blown campaign.

It should be noted that this is the time that N’Grath (see p179) flees Babylon 5. Though he was in no way involved with the plot to assassinate President Santiago, the alien was well aware that many in Babylon 5’s security force would suspect him in the shooting of Garibaldi. Suspecting that security officers would fabricate evidence if none could be found linking him to the attack, N’Grath fled not only the station, but the entire Earth Alliance, hoping to reconstruct his business somewhere in the League of Non-Aligned Worlds. This has left something of a vacuum on board Babylon 5 among the criminal elements, one that will not be filled for at least another four years. During this time, players will have the opportunity to carve out their own niche among the underworld, though with so many factions moving in to fill this void (even coming from off-station to try their luck), confrontations among criminal gangs will steadily increase as time goes on, matching the political upheaval that is to come. 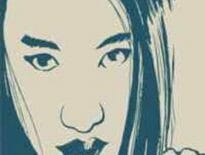