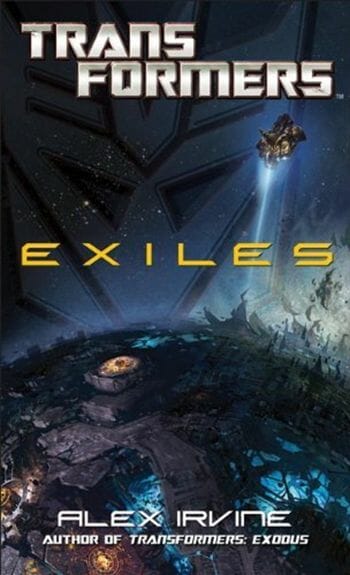 I have to admit that song alone brings back some fond memories from my past, and will probably take a day or two to get that earworm out of my head…

With such a well-known and long history, what could Transformers: Exiles by Alex Irvine bring to the story. Exiles follows up on from the authors first foray into the Transformers world and we catch up with Optimus Prime and his Autobot allies having been flung into space following the collapse of a Space Bridge as they leave a war torn Cybertron and begin their search for the AllSpark.

What I enjoyed about this book, which reconciled with the story line of the animated movie I remember from my youth, was the exploration of the Transformers history. I personally didn’t know that Cybertron was once ruled by the tyrannical Quintessons, or indeed any of the “mythology” of the 13.

I should point out that in the main, this book really wasn’t about the history of the Transformers or the 13 and how one became the “Fallen”. This book is about the search for the AllSpark, following the decision by Optimus Prime to eject from Cybertron to prevent Megatron from corrupting it with dark energon.

As such Optimus Prime is lead by the Matrix of leadership, to both Velocitron and Junkion reconnecting with Cybertronians that have been isolated for eons, and evolved along there own lines.

I suspect that anyone who is reading this book, has probably made their own mind up on what kind of bots both Optimus Prime and Megatron are and should be, Alex Irvine does try to develop both through their internal monologues. I would argue whilst he does achieve this (and again whilst I enjoyed learning about the previous relationship between the two leaders and one time friends), I was also left wanting for things to just get a move on.

The journey from Velocitron to Junkion, and the quest for the powerful artifact crafted by the 13, is for me made enjoyable by the characterisation of a select few lesser-known bots and the history of the Transformers.

I am fairly certain that some, both Autobot and Deceptacon, were written about because they had to be. That box ticked, lets move on to aspects the author wanted to talk about. And when writing about the aspects he does enjoy, Alex Irvine does it in style, which left me wanting more. Really, I wish there was more.

The Transformers! More than meets the eye! – well perhaps not in this case. An enjoyable read on balance, with nuggets of energon here and there. The enmity between the Autobots and Decepticons remains as strong and visceral as ever, but they were just the “vehicles” for their predecessors, the 13 Primes and their story. I would certainly be happy to read and learn more.

Transformers: Exiles by Alex Irvine was provided by Titan Books for the purpose of review. It is available in paperback for £6.99. Review by guest reviewer Dave.

i really dont care for the retcon history bay created for the transformers – what was wrong with the original one? allspark is a crapass religious macguffin 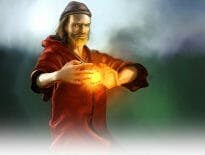