Police in Michigan had to arrest Batman on Saturday. Or rather, for the second time, police had to arrest Mark Wayne Williams who was dressed as Batman.

There had been a road traffic accident and Batman-Williams wanted to help look for the driver. The problem? Police were using a dog to try and track the scent .

‘He wouldn’t clear the scene, and we had a canine out there and he kept screwing up the scent,’

‘He said he wanted to help us look for the driver.

‘We didn’t want the dog to track Batman instead of the accident scene, and he was getting in the way of officers who had a job to do.’

Police first become aware of Batman-Williams when they received reports of a man in a cape and tights on the roof tops of buildings in the city. They investigated and found him with a baton, sand-filled gloves and a chemical spray.

The Petroskey Batman has a Facebook fan page with over 5,000 fans. At least, that appears to be his page. 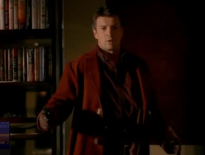