You are here: Home / Books / A review of Kevin Smith’s Tough Sh*t 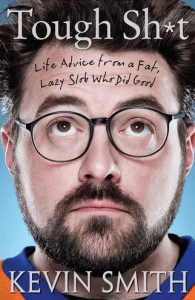 This isn’t an article on proctology but a review of the latest book from Kevin Smith – Clerks, Good Will Hunting, Mallrats and plenty more. Fatty McNoFly. That Kevin Smith.

Throughout the book you’ll be reminded that Southwest Airlines wouldn’t let him fly. You can tell he’s still annoyed by this – certainly not willing to let it go. Fatty McNoFly is his pet name, not mine, and in fact I think the picture of him on the cover of the hardback is the slimmest Smith I’ve seen.

It’s almost tempting to tackle this book review as one might tackle an onion. I want to start with the outer layer; the wrapping. You know how books tend to have quotes from famous people on the back in order to persuade you to buy it. There’s a comment from Tim Burton on the back of this one. The emphasis is mine.

“I certainly would never read anything written by Kevin Smith”

You just have to assume that’s a joke. However, this is my first Kevin Smith book and it wasn’t what I expected.

The inside of the fly cover starts well too.

“… What could you possibly learn from the director of Cop Out? How about this: He changed filmmaking forever when he was twenty-three, and since then he’s done whatever the hell he wants. He makes movies, writes comics, owns a store, and now he’s built a podcasting empire with his friends and family, including a wife who’s way out his league. So here’s some tough shit: Kevin Smith has cracked the code. Or, he’s just cracked.”

I fear I might be forgiven for thinking that this book would be about the “film making code”. Dig in below the skin and you’ll discover there’s more than just film code stuff in here. The intro and the first chapter quickly put me right. Smith dedicates the book to his wife’s asshole and then dives deep into the salty issue of his dad’s balls.

I think there are two Kevin Smiths. There is the wordsmith and remarkably perceptive commentator on culture. Then there’s the Smith who added the excremental, the shit demon, to Dogma. I think both of these Kevins (Kevi?) helped write the book.

My challenge is that I greatly prefer the wordsmith.

I enjoyed each insider’s reveal as if it was a plot twist in a movie. I can’t say that I the background, Kevin Smith’s life, was just a wrapper or a distraction though. It’s inclusion in the book does more than just provide context. I’m a great fan of the power of the web – I saw his battle with Southwest Airlines as a success. I’m not sure he does. The whole incident is discussed fully in the book. I know the tweets – and with Tough Sh*t I was given access to some of the behind the scenes comments.

This was the introduction from the first manager Southwest sent to try and cope with the situation once Kevin Smith had started tweeting. The request came with a $100 travel voucher that Smith declined.

We also get to see how his wife checked the news every day; Google News, watching how the coverage of the encounter grew. Good Morning America gets a bashing, described as the “date rape” of morning shows as they turned up at Smith’s house with a camera after he declined to come to the studio to talk about the drama.

I got a mixed vibe from Tough Sh*t. In parts I felt I was reading the book simply because it had been written by Kevin Smith, a director and writer I like, and I wanted to get onto the good bits. However, I also flew through the book with a page-turning speed usually reserved for fiction that has total command of my interest.

Tough Sh*t seems easy to recommend to any hardcore Smith fan but it’s more complex for anyone else. Overall; this autobiography is a low risk for a high reward investment though – if you’re not certain, but suspect you might like it, I’d grab a copy.

Disclaimer: My copy of Tough Sh*t was provided for this review.