Paizo Publishing have granted Dynamite Entertainment a license to create and publish a Pathfinder comic book. As Paizo is quick to point out; Pathfinder is now tied with Dungeons & Dragons as the best-selling hobby RPG. It was first published in 2009.

Dynamite is a little older, founded in 2004, it now has a range of comic book titles that include Green Hornet, Vampirella, Warlod of Mars, and even Game of Thrones.
Erik Mona of Paizo said;

“We are thrilled to be working with Dynamite on a new Pathfinder comic!”

“Dynamite’s proven record with licensed properties and their ability to attract top creative talent to their books make them a natural fit for Pathfinder, and we can’t wait to see how they explore the Pathfinder world!”

“We’re proud to be working with them to help bring Pathfinder to the comics market, and to bring our comics to their market. It’s the best of both worlds. This is the start of a great working relationship.”

This is not the first significant expansion of Pathfinder in recent months. In November Paizo announced an ambitious partnership with Goblinworks to produce a Pathfinder MMO. Goblinworks later blogged to discuss how the MMO would try and be built on hybrid of typical MMO structures as an innovative way to produce the demanding product at a fraction of the cost.

Should that be ‘tied’ not ‘tired’…?
Morning 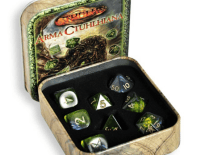