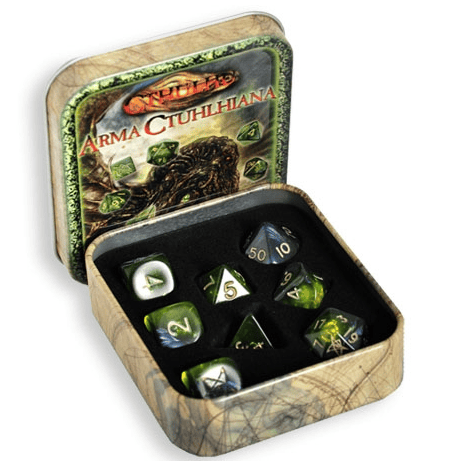 Brian Wood runs Awesome Dice shop and accompanying blog. Selling die online is surprisingly competitive and there’s a far greater range of options than even some experienced roleplayers might imagine. When Brian dropped Geek Native a note about a rather clever WordPress dice roller I thought it might be wise to get a walkthrough from the man himself.

Q. Can you give up a brief outline of what the Dice Roller does and two examples of scenarios in which it might be used?

It’s a WordPress widget, so anyone with a WordPress.org blog can immediately put the dice roller onto their site, where all their readers can use it. Other than being kind of cool, they spread dice to the diceless masses, letting any site stand in as a backup for a gamer who has forgotten her dice. It’s particularly nice if you’re using WordPress as the central hub for your campaign — something that’s more common these days.

The idea is that you can easily make a site that has all the details on characters and NPCs and setting for the game, and now you can also toss the dice roller on there as well.

It’s not as cool and satisfying as actually rolling physical dice, but at least it gets you a random number.

Q. As a company who sells dice – isn’t the Dice Rolling widget a competitor to your own product? What’s the business strategy here?

Frankly, gamers love dice and most of us are always going to prefer rolling dice to pushing a button. Certainly there are some people who might prefer the efficiency, and those people will find dice rollers elsewhere (phone apps, for example). So I don’t think any virtual dice roller ever really competes with dice: the audiences are separate without a lot of crossover potential.

Online, one of the best ways to get attention to your site or brand is to go out of your way to do useful or entertaining things and build useful tools, and then give them away for free. This is something I love about the internet, that it makes this kind of thing a viable business strategy, because in the long run it’s cheaper than advertising and gets you far more good will than banner ads and pop-ups ever will.

We have a bunch of plans similar to the dice rollers. If the rollers are popular enough we may make more specific ones for more games. We have some videos in the works. We also want to set up some dice rolling experiments to prove once and for all whether Game Science dice really do roll more true than standard gaming dice (but woo — that one involves a lot of work!).

The internet is set up to reward you for doing cool things and giving them away for free. How awesome is that?

Q. Did you develop the widget in-house or did you employ someone else to help out?

We hired a WordPress plugin developer to make them.

Q. You regularly blog about dice? Which has been your favourite post of the last 12 months and why?

Well to be fair, I sometimes blog about dice, and other times just gaming — which leads into one of my favorite recent posts on Cthulhu Mood music. I’m a huge Call of Cthulhu fan and I’ve been slowly hunting down some cool ambient creepy background music tracks for the game over the years. So I had a post sharing some of the top sources, complete with YouTube embeds where you could hear some sample tracks.

Q. Are there any other gamer and RPG blogs you would recommend to Awesome Dice’s customers and Google+ followers? What makes them special?

I’m a fan of Darrell Hardy’s blog. He’s a professional game designer who started designing tabletop board and RPGs and now works in computer games. His posts involve a lot of really good thinking about game design theory and mechanics — it’s fascinating stuff for any gamer.

Q. Awesome Dice clearly invests a lot of time with the web; Google+, Facebook, Twitter and an online store and I bet this takes up a lot of time. Is the internet important for the business?

Well, Awesome Dice was founded to be an internet business, so we certainly think the internet is pretty important!

The way people interact with and share content on the web has been changing quite a bit in recent years, which makes it an interesting time to be promoting an online site. Every time another new social media site rears it’s head you have to make a call about whether this could be a big thing, or one of the literally thousands that go nowhere. Google+ is a pretty safe bet, however.

Q. Do you see a trend for RPGs going online and gamers spending more time on the web? What does this mean for traditional publishers and players?

Yes, gamers are not separate from the rest the world population in this trend. People are moving more and more online. Just a few years ago the Yellow Pages was trying to argue that people would always use it for finding local businesses, and now that’s not remotely true. Between computers, laptops, smartphones and tablets the web is with us everywhere. More people are shopping online and socializing online because it’s just easier.

This is good for publishers, who have better access to communicate with their players. This is good for players who can find a lot more esoteric things a lot faster. Take Awesome Dice for example: very few game stores are going to carry the quantity and variety of dice that we do. But then, the only way as specialized a store as Awesome Dice can succeed is because we can sell across the country. If we had a physical shop downtown, we’d be out of business fast. We need the whole country to sell to. But the way the internet enables these kinds of niche stores with a variety of stuff that more generalized stores couldn’t justify carrying is a good thing for gamers.

This is bad for brick & mortar game stores, however. And that in turn is bad for players. Brick & mortar stores are a place for gamers to congregate and meet new gamers and be exposed to all kinds of new games. No online store has yet managed to make browsing nearly as good an experience as it is in a store.

But every dollar spent online is a dollar that’s kept away from those traditional games and comic shops. For many people who have no game store in town, online is all good. But for those that do, it can be a mixed blessing.

So there are many good things about the trend toward online shopping and socializing, but there are downsides. But, the one thing we know is that the trend is not going to change. Every year online sales and traffic is up and up and up.