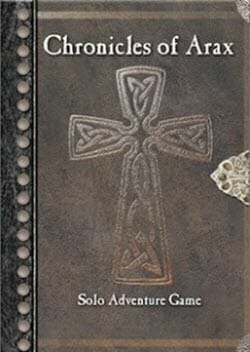 If you’ve already got a copy of Crystal Star Games’ Chronicles of Arax then this offer is a no brainer.

As an Easter promotion Crystal Star Games are giving a way promo codes to download the Chronicles of Arax expansion to anyone who emails [email protected] with the subject line “ARAX EASTER”.

Here’s a snippet from their wall.

The world of Arax is a world filled with blood and battle, magic and monsters, slaughter and sorcery. It is a world where the weak are crushed and the strong survive, where those who are bigger and more powerful bully those who are weaker and more vulnerable. It is a world in need of a Hero, someone who can stand against the darkness and fight on behalf of the downtrodden. A Hero like YOU.
Chronicles of Arax is a game where you, the reader, takes on the role of a Hero in the world of Arax. It is your job to fight against evil and injustice, to undertake various Quests to further the goals of good, and hopefully get some fame and loot in the bargain!

In Chronicles of Arax, you take on the role of a mighty Hero who, in the face of utter darkness, stands up for the light by undertaking missions and adventures (known as Quests) that will hopefully aid the forces of light.

Throughout Arax a Hero can come from any walk of life, be it a noble Knight, an elf Druid or a stalwart dwarf Stone Warrior. This rules manual includes one Hero type for you to play as: the Adventurer.