You are here: Home / Games / Tabletop & RPGs / How to play a tabletop RPG by yourself

Depending on definitions it is possible to play a tabletop RPG by yourself. For many people, a vital element of an RPG adventure is the ‘role’ in roleplaying, and that’s not the rolling of dice, but stepping empathically into the shoes of a character such as an elf paladin, or a robot space pilot or occult investigator. If your definition of that type of lightweight character acting does not require an audience, someone else to see you do it, then you can roleplay by yourself.

This form of tabletop gaming is generally known as solo roleplaying.

Roleplaying by yourself, with others

Technology has made it easier for tabletop roleplayers all over the world to find gaming groups. By the same measure gamers who might be unable to get out of the house easily or cautious about meeting new people now have better ways to get into games.

The gaming messaging app Discord is popular among gamers, used more than Google Hangouts and Skype. Discord allows gamers to create servers and invite people interested in roleplaying to hang out and chat. The usual first challenge is finding an open Discord server looking for new roleplayers. Geek Native’s post on 11 Discord servers for RPG fans may be an effective starting point.

Fantasy Grounds and Roll20 are two alternative virtual tabletops. Fantasy Grounds has the most official licenses but Roll20 works within your web browse.

By themselves, these virtual tabletops are only the first step into getting a roleplaying game going. You still need to find some gamers looking to play with you, but both have communities attached, and Discord groups often use both.

Choose Your Own Adventure gamebooks

A quick and easy way to achieve something similar to tabletop roleplaying by yourself is to try ‘Choose Your Own Adventure’ gamebooks like the Fabled Lands series, the Lone Wolf series, or the original Fighting Fantasy series.

These gamebooks are a mix of a fantasy novel, decisions and simple RPG combat and character generation mechanics. You read from the start, follow the directions and decide what your adventurer might do when asked, but you’re limited to only picking the responses that the authors have already written and so these books fall short of being proper RPGs.

A newer set of game books come from the publisher Penguin Comics. They have a set of ‘Random Solo Adventures’ which you can preview at DrivethruRPG designed to be as much like a typical tabletop RPG as possible.

Alternative tabletop RPGs you play by yourself

There are some specially made tabletop RPGs suited for one person. These use alternative methods to the simple decision engines of the game books and are more sophisticated.

A free download from Crystal Star Games written by Shane Garvey. Chronicles of Arax was first published on DrivethruRPG in 2011 and has since scored an average of 4 out of 5 review stars from nearly 40 reviews.

You play the game as a knight, an elf druid or dwarf warrior and end up on a series of missions (known as Quests) to assist the forces of light.

While the first set and core rules are free, there are some premium expansions you can buy for $1. It’s worth noting there hasn’t been any new content from Crystal Star Games in years.

Quill is a roleplaying game you can play yourself from Trollish Delver Games. You can pay as little or as much as you want for it but the suggested price is less than a dollar.

Quill was last updated in June of this year, at the time of writing, and has 4.5 review stars out of 5 after 40 ratings.

In Quill you won’t be adventuring through goblin filled mines; you will be writing letters. This original twist on the usual scenario secured Quill the Best Free RPG title in the Indie RPG Awards in 2016.

How to play a tabletop RPG yourself

However, any set of RPG rules you pick will likely usually need a Game Master or Dungeon Master. These are the people running the game, answering questions and helping decide what the non-playing-characters in the world do.

There are RPG supplements that act as GM emulators; using tables and rules instead.

As a single player, without a Game Master, this set of rules will allow you to play an RPG by yourself. You, of course, need the rules for that RPG and it very much helps if you know them well.

The Mythic Game Master Emulator also allows a group of players to play through an adventure without a GM as well as providing a way for a GM to run a game while creating adventures on the fly for their group.

You can pay as much or as little as you want for this set of rules from Conjecture Games and Zach Best. The suggested price is a few dollars.

Conjectural Roleplaying GM Emulator, known as CRGE, works by providing answers to “Yes or no” questions while trying to encourage something unexpected to happen. CRGE is system agnostic and so will overlay on top of any RPG of your choice whether that’s a fantasy, sci-fi or urban adventure.

The book is in two sections. The first half is the adventure creator which helps gamers put together their own RPG storyline using a structure of pre-prepared acts. There are hundreds of ideas for things, locations and plot devices in the download’s Story Charts.

Accessories to help roleplay by yourself

Enjoying a tabletop RPG by yourself is harder than it is with friends. You have to know all the rules yourself and, of course, you’re restricted in the style of game you’ll play. The chances are slim you’ll be spying and playing politics in a game like Vampire: the Masquerade in a solo RPG. It’s more likely that you’ll be in a dungeon crawl or boarding a spaceship as these are the game styles that suit “yes or no” questions and the GM emulators better.

However, some accessories and techniques can help out. This video by Geek Gamers looks at some methods for being your own GM.

The resources mentioned in the solo RPG guide video include;

This video tutorial ultimately gives the recommendation to the Mythic Game Master Emulator.

Word Mill, the publishers of Mythic, also sell the Location Crafter. This accessory is designed to either help Game Masters create locations for their group or can support a solo RPG.

Equally, there are supporting supplements from Conjecture Games that work well with CRGE. There’s the Universal NPC Emulator (revised) which allows you to create NPCs yourself. This is a ‘pay what you want’ product, but the suggested price is a few bucks. The same publisher also offers Universal PC Stories and Deeds Generator, for another few bucks, which can generate character histories, background events and even adventures from a few dice rolls.

This article on how to play a tabletop RPG by yourself is far from exhaustive, and there are sites worth checking out.

The Reddit community on Solo Roleplaying has nearly 300 members and generates a few posts a week. This group will be a recommended go-to place if you have any specific questions about products or challenges you face.

Die Heart has a fantastic collection of solo RPG resources well worth checking out.

Finally, there’s the site RPG Solo which provides an online generator of sorts that will help answer questions (the buttons at that AI (Almost impossible), VU, U, SU, 50/50, SL, L, VL, ST) across the bottom as well as actually produce words and phrases.

An example of solo tabletop RPGing

This is a long (over two hours) video from Artichoke Dip, who puts his video into vertical view, and then walks us through a session of playing a tabletop RPG scenario by himself.

It is possible to play a tabletop RPG yourself, but it will require extra rules and resources on top of a standard RPG.

Solo RPGing isn’t necessarily something that you are expected to work out how to do straight away so don’t hold back on asking any questions, either in the comments below or in the communities mentioned above, if you get stuck.

If you have any additional tips of your own that will help someone play an RPG by themselves, then please do share them below.

Free solo and coop no dm play based on the apocalypse engine. https://www.ironswornrpg.com/

There is a lot of great resources in this post! Choose your own adventure is the way I am most familiar with, but it’s cool to see there is more beyond that.

Thank you! Do you have a Choose Your Own Adventure recommendation? If someone hadn’t heard about those gamebooks before finding this post and then discovered this thread which book would you recommend to them?

The “Solo Adventurer’s Toolbox” just came out and is another great resource: https://www.dmsguild.com/m/product/252355

That’s a useful link, thank you!

I think this is a unique idea, but personally wouldn’t be for me. I like to play with a group and I enjoy that social aspect of gaming.

Zack Best of Conjectural Games has passed away, but buying his products does help his wife. There is even a cool bundle in his name on DTRPG. Lone Wolf Roleplaying has a G+ and MeWe solo community that is more active than Reddit. (They’re all connected in a way.)
https://plus.google.com/communities/116965157741523529510
https://mewe.com/join/solo_roleplaying

Four Against Darkness is a solitaire dungeon-delving game that may also be played cooperatively. No miniatures are needed. All you need is this book, a pencil, two dice, and grid paper. Choose four characters from a list of classic types (warrior, wizard, rogue, halfling, dwarf, barbarian, cleric, elf), equip them, and venture into dungeons created by dice rolls and your own choices. You will fight monsters, manage resources, grab treasure, dodge traps, find clues, and even accept quests from the monsters themselves. Your characters will level up, becoming more powerful with each game:

For playing on PC or Android, there is also Choice of Games that makes Choose Your Own Adventure games that very much feel like books.

Actually on kickstarter, a RPG with GM-less and solo mode with tiles and cards (and great artwork !)
https://www.kickstarter.com/projects/175522302/adventures-in-austerion/description

How to play a tabletop RPG by yourself 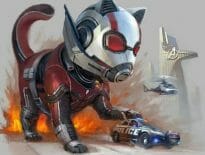 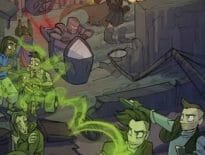 Comics Scottish rot witches: A review of Plagued parts 1 …
wpDiscuzComment Author Info
Manage Cookie Consent
This site uses cookies 🍪, and links are ads that may earn bloggers some money 💰, and with this alert, I very much hope that these dark truths 🧌 are acknowledged.
Manage options Manage services Manage vendors Read more about these purposes
Preferences
{title} {title} {title}
Loading Comments...