[The following is a transcript of Audio EXP: #178]

In the last episode, number 177 we looked at the best selling RPGs on DriveThruRPG tagged fantasy, horror, modern or sci-fi. That’s part one. We’ll look at a few more this week and finish with part three next week.

Last week, I also talked about Jasper’s Game Day, an RPGers charity that works to make sure gamers like you aren’t left out of life. If you want to, reach out, and they’ll listen. This time of year, when everyone else seems so happy, and so busy, it’s no wonder we might feel left out.

Handiwork Games are in the Spotlight this month, as voted for by Patreons.

When Handiwork launched, Jon tells me, some people thought he was taking risks. What was the big drama? Having employees, not just freelancers. In fact, Handiwork Games is partly staff-owned, and you can read more about the impact of that in the Spotlight interview.

If you’re a patron, thank you, and you can vote for the Spotlight interview for January. Links via the show notes and transcript.

Right, let’s do some best-seller stats and start with family. If you’re a regular listener, you know I sometimes rant at the word ‘family’ when it is used to describe suitability. I mean, it’s not as if orphaned kids or adults wouldn’t also enjoy these games. But, DriveThruRPG is just following what’s commonly understood, so I’m not ranting at them.

Instead, let’s tell you the top three family RPGs as defined by titles published this year and how much they’ve sold.

There’s another multi-genre topic at DriveThruRPG; that’s the miscellaneous category. So, here’s the top three miscellaneous tagged RPGs or products published this year.

I also have a cut of detail to reveal the best selling RPGs from new publishers. These are people who hadn’t published on DriveThruRPG, at least, not with the identity they currently use.

There are other sites in OneBookShelf’s collection of stores. They have a deal with Wizards of the Coast to allow community content D&D titles, and I can reveal the best selling titles published this year in the DMsGuild.

There’s also the Storytellers Vault, which is where community content for the World of Darkness, the Chronicles of Darkness and Exalted can be found.

We’ll get back to RPGs almost immediately as we outro with bundles and freebies. It’s Hogmanay, the biggest party night in Scotland after all, and I’m heading off into the darkness of Leith to cross town and meet up with some of the Edinburgh Indie RPG squad to celebrate the bells.

There’s time for some anime first, though. I’ve been posting one or two trailers this week to try and catch up with the backlog. Let’s focus on Chained Soldier, which I teased for being all sub-dom in nature.

I think I’m right, though, as a humble guy finds himself in a dangerous world. He’s rescued by a woman in a military uniform who makes him submit to her. In doing so, he transforms into a demon soldier who carries her into battle.

I’m told the manga is good, and it’s from the creative talent behind Akame ga Kill, so I won’t write it off.

I want to start the deals with Lost in Dungeon’s Journeys into the Unknown.

That’s not free anymore, but it was for a while because the publisher wanted to gift something to gamers who didn’t have friends or family handy to spend Christmas with.

It’s quick, deadly and thematic, and it’s now only a few bucks. I still think it’s worth checking out.

The next freebie is from TGS Games, who have made the core rules to Vault Peddlers available.

It’s a baroque post-apocalypse, and you can play sentient rubbish, and in addition to creating your character, you make the caravan your PCs belong to and trade with.

There’s also Isle of Dragons: Player’s Guide as an OSR that’s been well-supported by free adventures is shaped in a TV episode design and all for free. It’s the Director’s Guide that must be paid for and that’s about ten bucks.

Lastly, but based on the number of retweets and Mastodon boosts the post has had, it’s a popular one there’s Welcome to Grimsbury. This is an RPG of English folk horror based in a fictional Grimsbury. Think Wickerman with coal mines.

In bundles, we have got a second chance with Fate Worlds and Toolkits as the deal returns to the Bundle of Holding after little over a year. That’s quick. There are titles like Fate of Cthulhu, Young Centurions and Shadow of the Century after the threshold.

There’s also an offer from Goodman Games and Humble. There’s a new Dungeon Crawls Classic perils bundle worth looking through to boost your collection.

Lastly, a reminder that if you’re a patron before the end of the year – good luck with that – then you’ll get the Ananthia Campaign Guide as a digital gift. 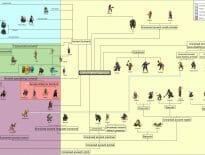 Tabletop & RPGs DnDarwin: An incredible evolutionary tree of playa…
wpDiscuzComment Author Info
Manage Cookie Consent
This site uses cookies 🍪, and links are ads that may earn bloggers some money 💰, and with this alert, I very much hope that these dark truths 🧌 are acknowledged.
Manage options Manage services Manage vendors Read more about these purposes
Preferences
{title} {title} {title}