I hit play on the Japanese-only trailer for Ayakashi Triangle before knowing anything about it, and despite the cliche, it had a strong start. I’m a sucker for yōkai and a Night Parade vibe, and I’ll happily live with ninjas leaping from tree to tree.

It gets awkward when young women of undisclosed age are fan-serviced, and by the time we had a boob bounce, I was about to walk away. Ayakashi Triangle is an ecchi comedy, but there’s a twist.

The twist? That fat cat turns our strapping young ninja dude into that buxom ninja lass.

The anime is an adaptation of Kentaro Yabuki’s Ayakashi Triangle, which will debut in Japan on January 9.

The manga ran for eight volumes, and Kentaro also created content for To Love-Ru and adapted the very popular Darling in the Franxx.

Viz Media and Shueisha are digitally publishing the manga in English, and Seven Seas is releasing the compilation book volumes in English digitally and physically. Seven Seas summarises the plot:

Teenager Kazamaki Matsuri has long been part of an elite force of ninja exorcists, tasked with fighting malicious ayakashi spirits who threaten Japan–especially those after his childhood friend, the spirit medium Kanade Suzu. As he fiercely protects her, and his relationship with her blooms from friendship into something more, a powerful cat ayakashi vows to get between the lovebirds: by casting a forbidden spell that turns Matsuri into a woman! With no apparent way to undo the spell, Matsuri must continue battling ayakashi–and go back to school–in this new feminine body until he can find a way to turn back.

Ayakashi Triangle is directed by Noriaki Akitaya (The Strongest Sage with the Weakest Crest) at studio CONNECT. 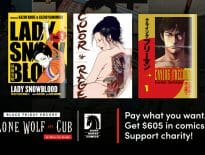 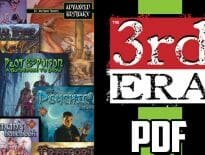 Tabletop & RPGs Green Ronin slashes $700 to $30 in the 3rd Era (d2…
wpDiscuzComment Author Info
Manage Cookie Consent
This site uses cookies 🍪, and links are ads that may earn bloggers some money 💰, and with this alert, I very much hope that these dark truths 🧌 are acknowledged.
Manage options Manage services Manage vendors Read more about these purposes
Preferences
{title} {title} {title}
Loading Comments...