You are here: Home / Games / Tabletop & RPGs / Dread Shores & Black Horizons: We stand on the brink of cataclysm

If RPGs are about escapism, they reach this goal differently. Archon Games’ Dead Shores & black Horizons is a system-neutral adventure set in a doomed world poised on the brink.

There are only a few days to join this x10 funded eshatonic revelry and you can do so from the Kickstarter pitch.

The adventure is set in dark fantasy and is ready to play with systems like 5E, OSR or alternatives.

Archon describes it as laden with doom and dread. The 36-page module deals with investigations and survival as characters battle in a harsh environment.

Throughout the realm, there are those that whisper legends regarding the end of days – rumors of a great entity, cast beyond the veil of reality, scratching at the seams with rapacious vigor. Borne on the tide of arcane fires, the breach of their return would yield an apocalyptic cataclysm.

As the onset of this pressure fractures the realm, dark intention finds physical manifestation amidst the daily lives of those who inhabit the established territories. Ancient relics, imbued leylines, and twisted fiends all carry traces of this ruinous distortion.

Though the omens chime of certain doom, there are those that seek these nodes for their own gain. Cults of all sizes rise and rally around the confluence of arcana found in these treasures, locations, and abominations. Heralds to the onset of Armageddon, the conclaves muster and channel arcane power from beyond the veil. All the while, the reach of the fabled ‘Dark One’ lengthens across the realm.

A pledge of $10 will get backers the PDF of Dread Shores, including digital tokens, maps and handouts.

Upping your contributions to $20 will result in the printed zine added, and I imagine there is shipping to sort out later.

A pin joins the loot pile at $25; a popular tier is $55, which also adds a box, printed maps, character sheets and handouts.

Irrespective of the backer tier, those who support the project have an estimated delivery date of October this year.

Dread Shores & Black Horizons: We stand on the brink of cataclysm 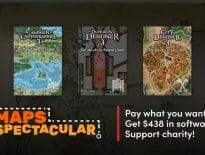 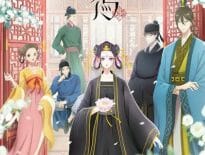