I warned Geek Native, regular readers and podcast listeners that August would be disruptive. It’s not GenCon, and it’s not ZineQuest.

The explosion of festivals in Edinburgh is a bomb of excitement hitting my schedule. Expect weird posting schedules.

It’s a festival of festivals. Its worlds of comedy, drama, art, food, science and entertainment are hitting this historical city, and it’s a fringe of festivals around that. Sounds like a campaign backdrop to an RPG? I think so, and Twenty-Sided Tavern is rocking up for it.

How would you describe it if someone told you they had no idea what D&D was like?

Having answered this question before many, many times, I would tell them it’s a storytelling game that we all play together. I tell you a story, and you play a character in that story. You decide what you want to do in the world that I create and often you roll dice to determine how successful you are at doing what you want to do. I’ve often walked interested parties down a path in the woods with a rustling in the bushes. Hearing what they decide to do with that little information can be very informative and a lot of fun.

If someone told you they only knew D&D through Stranger Things, what would you tell them to prepare them for an actual game of D&D?

I would caution them that if the specific enemies they’re facing in D&D start to materialize in the real world then after defeating the first one, they should use that to their advantage like lucid dreaming and create a homebrew campaign where the BBEG is made of Dr Pepper and hugs.

How does The Twenty-Sided Tavern experience differ from a game of D&D?

There are a lot of functional differences; everything has a roll attached to it, even your auto-hit spells like Magic Missile. This allows for the maximum odds of something going really right…or hilariously wrong. It’s also different because of our giant twenty-sided die, our proclivity to have audience members name the NPCs, the number of times we engage in physical competitions…or maybe it’s not that different depending on how you play your at-home game.

If a gamer was used to the Twitch experience of watching a gaming group and interacting while the game happens, what would you tell them to lure them into the audience for The Twenty-Sided Tavern?

There’s just nothing like in-person entertainment. Being in the same physical place with a community of people who are all there to experience the same thing has been an integral part of the human experience for as long as there have been humans. The biggest difference between TST and something like Twitch is that there’s no delay. It’s all happening in real-time, right in front of you, which only heightens your level of impact and engagement. While you can still maintain your distance and operate solely on your phone, there’s also always the chance that you might get called up onstage to roll a die or play some Fantasy Beer Pong.

There’s some clever technology to allow audience interaction for The Twenty-Sided Tavern. Do you hope that sort of participation becomes common and frequently used, or would you prefer to keep you and your show among the few trailblazers in the field for a while longer?

We see the value in Gamiotics tech nearly everywhere, from theatrical experiences to sporting events to museums. The immediate engagement that this tech provides is a cultural phenomenon, and as natural-born adventurers, we love a bit of trailblazing.

The Tavern has never been to Edinburgh, but it’s a thrilling maiden voyage. Some members of our team have been to Edinburgh casually, some have been for Fringe with other projects. We can’t wait to get into the theatre, but also to get out on the streets with our giant twenty-sided die.

What are you hoping to experience for the Festival?

We’re excited to see what these specific audiences have to offer! What curveballs they’ll throw us and what adventures they’ll take us on. We’re also looking forward to seeing as many other shows as our schedules will allow, and celebrating with fellow performers and audience members in Bristo Square afterward.

What memories are you hoping to give audience members for the show?

Something truly and undeniably unique. Something where you walk away with no doubt in your mind that what happened in this quest has never happened before. Whether it’s a joke that got made or a stunt that got pulled. A path that was chosen or the way a monster was defeated. We want you to remember how your presence was instrumental to the story that we told.

What next for the Tavern?

We’re not yet at liberty to divulge, but some very exciting announcements are coming soon! We’re lining up our Fall & Winter engagements, and the plan for the next few years is for a lot of different parts of the world to be seeing a lot more of the Tavern.

Thanks to DAGL for their time. I note, reassuringly, that friends have seen ads for The Twenty-Sided Tavern and tagged them for my attention.

Worlds collide: The Twenty-Sided Tavern at the Edinburgh Festival season 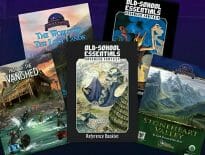