You are here: Home / Games / Tabletop & RPGs / YZW: The One Ring Landmarks and Werewolves

This month continues exploring Middle-earth, this time going to a hidden hamlet in the Evendim Hills using The One Ring Second Edition (which doesn’t use the Year Zero system).

Landmarks are smaller locations in Middle-earth with detailed information on the inhabitants along with maps but without scenes or a fully fleshed out adventure. The Hidden Hamlet is one such landmark. In addition to the landmark, this month looks at the werewolf.

The One Ring has werewolf stats in it, but I wanted a more powerful version. So I created my own werewolf for my version of Middle-earth and placed him in the landscape called the Forgotten Hamlet.

The Forgotten Hamlet of the Hills of Evendim

Rangers know of a hidden hamlet in the Hills of Evendim near the lakeshore. Content to be left alone, the Men of the village have fallen under a curse but refuse the Rangers help. The Men know the region of Evendim well and that knowledge would help explorers and treasure hunters.

The village is named Eskerdale. The people are not Rangers but used to have dealings with them long ago. A Ranger suffered a bout of madness and people died and the villagers have not forgotten the incident.

Journey Event, Positive. Walking past a dense thicket, the Player-heroes see a hidden glen covered in a variety of flowers. They grow over the broken statue of some ancient King of Men, armed not with sword and shield but instead a bowl and cloth, as a healer might use. Bright flowers grow in the bowl Anyone who examines it and makes a HUNTING roll can identify the plant as Kingsfoil. A sprig of it can be harvested, allowing a hero to gain (1d) when making a HEALING roll. It is consumed in the process.

Journey Event, Negative. A body is seen off of the route the Player-heroes are following. If they investigate, they fall into some type of difficulty. The body is a Ranger of the North, dead and stripped of gear. A dark find indeed.

The central point in town, just west of the river and attached to the bridge, is the Newbridge Tavern, a quiet and rustic establishment that serves decent lamb and fair beer. Beneath the bridge itself is the lair of the werewolf and its wargs.

The ruins of a keep are atop Tower Hill, and the keep contains traps and treasure.

Tower Hill itself was the lair of a bandit with a paranoid nature. The bandit is gone, but not his spoils. While his treasure is still there, it is guarded by simple but dangerous traps.

The courtyard outside the keep in the northeast corner is strewn with debris and rigged with falling rock traps. It is a Laborious attempt to clear a path while avoiding the traps with eight skill attempts allowed. If three skill attempts fail, one Player-hero takes a source of injury from falling debris with a moderate Endurance loss (page 134). If the skill endeavour fails, a Player-hero suffers a severe Endurance loss, and the way forward is blocked. A completely new skill endeavour can be attempted to continue, but if this one fails the inner keep cannot be reached.

The inner keep requires overcoming a Daunting goal within ten skill attempts to ascend a crumbling staircase and search a room with a broken floor for the treasure. Three failures lead to a moderate Endurance loss, six failures cause a severe loss, and a complete failure results in a grievous Endurance loss with the complete collapse of the keep and the loss of the treasure.

A werewolf guards an ancient treasure and keeps watch for heroes growing in power. It primarily preys on wild animals, but occasionally it takes an animal from Eskerdale. The villagers’ chieftain, Oswin, fears it may take a villager eventually. So far, he has forbidden his people from protecting their livestock, and they grow sullen and angry with each new attack.

The obvious location for the werewolf’s lair is Tower Hill which locals avoid and name as dangerous. However, the werewolf actually lairs beneath the bridge in a series of caves beneath one of the supports, coming out only at night through a series of rough tunnels. It is only a matter of time before someone spots it emerging from underground and gets killed to keep the secret.

Claws 3 (5/14, Seize: the victim fights only in a Forward stance making Brawling attacks. Freed by spending an icon from a successful attack roll.)

Strike Fear. Spend 1 Hate to make all Player-heroes in sight gain 3 Shadow points (Dread). Those who fail their Shadow test cannot spend Hope for the rest of the fight.

Prey Hunter. If the werewolf was not hit this round with a silver weapon or a weapon with known magical properties, its attacks are made with a Favoured Feat die roll.

Curse of the Werewolf. If an attack results in a Wound, the target also suffers the curse of the werewolf. On the night of the full moon, the target suffers a bout of madness (page 139) but are not Ill-favoured and do not lose Shadow points. They do advance along their Shadow Path. The Beornings are said to have a cure for the curse, which involves using wolvesbane. Otherwise, if the target reaches the end of their Shadow Path, they become werewolves themselves.

Hideous Toughness. When an attack inflicts damage to the creature that would cause it to go to zero Endurance, it causes a Piercing Blow instead. Then, if the creature is still alive, it returns to full Endurance.

Thick Hide. If the werewolf was not hit this round with a silver weapon or a weapon with known magical properties, it makes Protection rolls with a Favoured Feat die roll.

Treasure: 8 Treasure per Player-hero and Amarth: Eregion Elvish bow, Bane of Wolves; Superior Keen, Biting Dart, and Superior Fell; brought by a follower, who fell in battle, of Galadriel and Celeborn when he stayed near Lake Evendim during the Second Age

YZW: The One Ring Landmarks and Werewolves 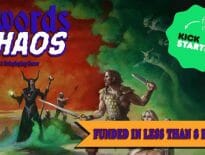 Tabletop & RPGs Hark, you dogs of the Underworld: Swords & Ch… 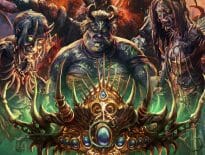