You are here: Home / Games / Tabletop & RPGs / Hark, you dogs of the Underworld: Swords & Chaos RPG levels on Kickstarter

Swords & Choas is a roleplaying game from Blackspire Fantasy which is on the road to doubling its Kickstarter target in just a few days.

The tabletop game is inspired by the worlds of Charles Saunders, Karl E Wagner and Robert E Howard. Magic is rare and dangerous and combats brutal. You can join the project, or find out more, from the pitch page.

Swords & Chaos uses a single roll to resolve most situations as the tabletop RPG keeps the focus on fast and fluid action.

When required, players roll a d20 to determine success. That roll is modified based on their attribute by -3, +3 or something in between and then by the character level. If the attribute being used is a primary one and that d20 combination is 12 or more, it’s a success. If the attribute used is secondary, the total must meet or beat 18.

The world is without elves or dwarves, even monsters are rare, and most rivals are other humans. The project includes a detailed gazetteer and history.

Swords & Chaos was meticulously crafted for those who love white-knuckle tales of heroic fantasy. Suffused within its pages are the pulp, prose, action, philosophy, and doom of such titans of fiction as Robert E. Howard, Charles R. Saunders, and Karl Edward Wagner, among others. If larger than life heroes facing wicked villains and indescribable horrors in a mysterious age of antiquity fills you with a sense of wonder, excitement, and a desire to crush your enemies, then by the gods of New Atlantis, take up your axe and join us!

A pledge of $20 to support the came is rewarded with a PDF copy of the Swords & Chaos RPG.

Backers who offer $50 or more will get a physical book instead with a wraparound hardbound cover. Those who commit $60 to support the project will get both.

The estimated delivery date is November 2022.

Hark, you dogs of the Underworld: Swords & Chaos RPG levels on Kickstarter 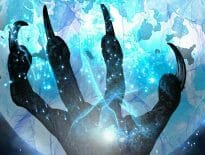