Last month I discussed landmarks and discussed several around Lake Evendim. One of those landmarks involved diving into the lake itself to explore drowned ruins. Which lead me to research diving bells.

A diving bell is a large metal bell that can be sunk into water. Air is trapped in the bell and divers can work from this air pocket underwater. If barrels of air are strapped to the outside and connected via hoses, the air inside can be replenished. A smaller bell could be worn on the head and provide similar air while exploring underwater.

At first, this low tech option might sound outlandish for Middle-earth. However, the world has advanced farming as well as gunpowder in the form of fireworks and other rare explosives. While wizards control the secrets of gunpowder, nothing would stop a skilled craftsman from forging a diving bell.

Of course, if you research diving bells you also uncover the diving bell spider, an arachnid that spends almost its entire lifespan underwater. Of course, the giant sapient spiders known as the Children of Ungoliant live in dark and perilous places in Middle-earth and I think in a haunted lake qualifies. Those spider children capable of language are vicious and malevolent creatures. Having these monsters dwelling beneath Lake Evendim sounds like a wonderfully awful idea.

Basically, if the Player-heroes work up the courage to go diving they are going to imagine various horrors they will have to face. I don’t think they will immediately think of spiders. But imagine being trapped underwater in a small cramped space and then being swarmed by spiders. You can’t run away as getting to the surface takes time. Creepy and claustrophobic.

Here are two landmarks that combined make a fine night of gaming. The first landmark holds the diving bell. And it leads to the next landmark, the diving bell spider lair.

The tower is easily entered from the ground level. However, both the top level and lower level are choked with hazardous debris and unstable stairs. Both levels need repairs before they can be accessed and those repairs can be dangerous. Getting to each level is a Skill Endeavour.

Standard: Broken stairs to top, have to be repaired.

If the first set is failed a Player-hero suffers a Moderate fall. If the second set is failed, a Severe fall.

Treasure: Key to vault below. Mosaic map, missing several pieces. Once assembled, it points to the lairs of several dangerous spiders that have infiltrated Eriador.

Hazardous: Weakened supports to basement, have to be shored up.

Failure in each set leads to falling debris that is increasingly dangerous: Moderate, Severe, and finally Grievous.

Treasure: 25 including 5 in colorful mosaic piece that fits in the map above plus diving gear: diving bell and air barrels and air spigot attached to lake barge, also has heavy cloth suits and boots with individual bell helmets with thick glass portholes in front that connect via hoses to the barrels (Athletics to do anything strenuous and underwater is Perilous).

Inside of bell has map with spots marked (along with a large rusty stain) with an open empty chest and/or with a skull and crossbones. One close to the Tower is also marked exploration items.

A gate opens onto lake and a pier.

The spot near the tower is mostly flooded and most of the gear once stored there is ruined. However, the treasure below can be recovered. It is a dry area that can be reached by swimming through a narrow flooded tunnel. Once the recovery begins, all the activity will attract the diving bell spiders that nest nearby beneath air-filled webbing. They will enter the treasure chamber and likely the diving bell as well, making the battle take place on two fronts.

Battlefield: treasure room and diving bell connected by a flooded tunnel. Both are dark and damp. Half the attercops attack each location, with the great spider going where the most Player-heroes are. It takes a Main Action to swim to either location.

Spider-poison: If an attack produces at least 1 Success icon, the target is poisoned per the chart at the end of the day. A Poisoned character falls to the ground paralyzed after a number of rounds equal to his Body or Heart rating, whichever is higher. This effect of Spider-poison wears off after one full day.

Seize: The attacker holds on to the target — the victim can only fight in a Forward stance making Brawling attacks. Seized heroes may free themselves by spending a Success icon from a successful attack roll.

Great Leap. Spend 1 Hate to attack any Player-hero, in any combat stance, including Rearward.

Fear of Fire. The creature loses 1 Hate at the start of each round it is engaged in close combat with an adversary wielding a torch or other sort of burning item.

Spider-poison: If an attack produces at least 1 Success icon, the target is poisoned per the chart at the end of the day. A Poisoned character falls to the ground paralyzed after a number of rounds equal to his Body or Heart rating, whichever is higher. This effect of Spider-poison wears off after one full day.

Seize: The attacker holds on to the target — the victim can only fight in a Forward stance making Brawling attacks. Seized heroes may free themselves by spending 1 Success icon from a successful attack roll.

Denizen of the Dark. All attack rolls are Favored while in darkness.

Dreadful Spells. Spend 1 Hate to make one Player-hero gain 3 Shadow points (Sorcery). Targets who fail their Shadow test or who are Miserable cannot attack a Great Spider for a number of rounds equal to 10 minus their Wisdom rating.

Hiss of Triumph. Spend 1 Hate to restore 1 Hate to all other Spiders in the fight.

Next month will be more coverage of Middle-earth and how to build your own version of that world for you’re The One Ring campaign. 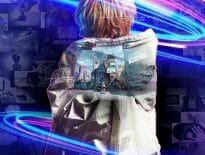 Movies Adam by Eve is a live animation hybrid from Netfli… 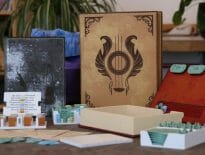