Kickstarter has had a flurry of activity today, with “Projects We Love” badges being handed out more generously than I’ve seen before and loads of Zines going live despite Zine Quest being delayed.

Let’s look at something else. Kobayashi is an RPG who mainly writes in French, but sometimes English, translated to Japanese and other languages. Kobayashi is funding Fleaux, a polysemic word meaning a few different things, but in this case, it is a brutal fantasy RPG. You can read more or back it from the pitch page.

Inspired by the Black Hack 2e and Kobayashi’s own Black Sword Hack this RPG is a brutal medieval survival stand-alone game with a baroque feel.

The classless RPG defines characters by origin, upbringing and occupation. Oh, and by the crime, they’ve been accused of.

The system uses a d20 with players trying to roll under the attribute in question and combat fast and deadly. There’s magic too, but also dangerous and messy.

Stepping up to €12, as most backers have, gets you the PDF and a coupon code to order a physical copy from DriveThruRPG. You’ll still have to pay for that.

Impressively, the project is estimated to ship in weeks, in March 2022. 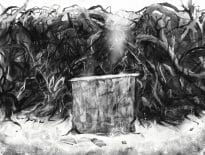