You are here: Home / Games / Tabletop & RPGs / Lords of Chaos will be a gritty high fantasy tabletop RPG

House Chaos Games set themselves a modest goal of $300 on Kickstarter for the Lords of Chaos TTRPG and have taken in over $1,500 in pledges in days. There are weeks to run on the campaign.

The percentage-based RPG offers two things traditionally hard to put together; high fantasy (fireballs, elves, epic adventures) with grit (minor cuts can be dangerous, life is hard). One is don’t sweat the small stuff; the other is the opposite.

There’s also an adorable dog in the pitch video, which helps. You can join in from the project page.

House Chaos Games, a new name to me but one I sense one with some experience in communications, list reasons why you might want to play Lords of Chaos;

None of which is unique, but all influence attempts to blend high fantasy (versatile magic) with grit (combat and consequences).

HPs don’t increase with rank. I get the arrow through the head analogy, and it works if Hit Points aren’t being used as an abstract measure. In Lords of Chaos, it looks like HP are a little less abstract than in many 5e-style games as there are hit locations and armour that absorbs specific types of damage. There are rules for parries as well.

Many games strike a balance between realism and abstraction. LoC leans toward realism. For example, while the game is not a combat simulation, its combat system is designed to immerse PCs in gritty conflict that presents players with meaningful tactical choices. Thus, players benefit from paying attention in combat, not just waiting for their turn to arrive.

Backers who contribute at least $20 will get a copy of the PDF edition of the core rules and The Forsaken Shore starter module.

Supporting international shipping, but with those costs added later, $35 adds the hardcover rulebook to the reward bundle.

A leap up, $120 or $135, gets a five-hour meeting with the Lords of Chaos game developer for a remote session and after-game review. The difference in cost is whether you also want a hard copy of the core rules or not.

Lords of Chaos is expected to be fulfilled around August this year.

Lords of Chaos will be a gritty high fantasy tabletop RPG 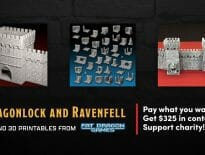