You are here: Home / TV / Anime / Netflix trails Shaman King ahead of part 3, launching this week

After a wobble, Netflix has confirmed January 13th for the next chunk of Shaman King. Part 3 of the odd series starts this week.

It is an odd anime, dark and sin in places but presented in a light, almost youngster-friendly tone. A villainous doctor gleefully torturers one character early on, almost as a joke. Later, he’s virtually a goodie.

This batch of releases catches us up with Japan (nearly) and takes us to the Mt. Osore Revoir arc.

Since August, the anime has been running on Netflix, but it’s the second version, the first having to split from the manga plotline as it caught up before it finished.

Shamans possess mysterious powers that allow them to commune with gods, spirits, and even the dead… and Manta Oyamada’s about to learn all about them, because his class just welcomed a new transfer student: Yoh Asakura, a boy from way off in Izumo… and a shaman in training!

Netflix trails Shaman King ahead of part 3, launching this week 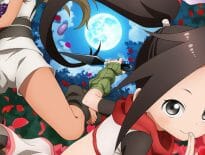