Murky Grey Matter are a new RPG publisher. They’re on Twitter, Facebook and I found this site which looks like them too. However, it may be a staging site exposed to the public web accidentally based on the unlikely URL.

The publisher is also on Kickstarter for a tabletop RPG called Colonized, set in the grim aftermath of an alien invasion and offering to explore our dark psyche. It’s the biggest RPG crowdfunding launch of New Year so far, asking for $25,000 in funding.

Murky Grey Matter doesn’t hold back. This is don’t be an adult game, one that deals with how the threat of death or enslavement can strip away our humanity.

Murky Grey Matter faces one challenge: backers can’t know the publisher well enough to understand how these adult topics will be tackled. The company faces other challenges, but that’s the forefront of my mind as I read their Kickstarter pitch. Are they edgelords who want a dicy dice game against a brutal backdrop? Are they looking for thoughtful exploration, within safety systems, of humanity’s mindset? Somewhere in between, most likely, but where?

The young publisher is undoubtedly ambitious as their website mentions three other projects. One called “Supers” is about the ego digging into depression and victim mentalities. The “End Days” RPG is another survivors dilemma game, and “Space Opera” has characters do dirty deeds to keep their ship flying. All three are about exploring less than savoury but perhaps necessary behaviour.

Here’s what they say about Colonized;

This game was created to provoke creativity, adaptation, and improvisation while exploring the darker parts of the psyche. A path of light and hope, or darkness and cruelty is your choice. How far down either rabbit hole the journey goes depends on the players. The gameplay engages on other levels as well. Communication, building trust with other cells of the resistance, avoiding extermination, striking blows at the occupying force, and freeing those that have been captured, all while trying to devise a way to repel these creatures for good, are all integral aspects of a successful apocalypse.

The RPG will use its own system and supplements are planned. The core book will contain the “down and dirty” mechanics, pre-made characters and character generation rules, alien invaders, campaign ideas and details on equipment and the state of the human resistance.

The GM supplement is “How to Inspire Hope in an Extraterrestrial Occupation” and includes discussion on morality, missions and how to ensure there are enough small victories in a bleak game to keep people involved.

Backers at a pledge of $25 will get the core rules in PDF and digital stretch goals. At $35, a print book is added with shipping to be calculated later.

Supplements become available to backers at the $40 level or higher. Early bird tiers are available but on a timer, so running out. They offer bundles.

Delivery of the tiers is slated for March 2023. 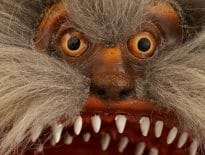 Geek Stuff The world’s freakiest Fizzgig plush prop is …
wpDiscuzComment Author Info
Manage Cookie Consent
This site uses cookies 🍪, and links are ads that may earn bloggers some money 💰, and with this alert, I very much hope that these dark truths 🧌 are acknowledged.
Manage options Manage services Manage vendors Read more about these purposes
Preferences
{title} {title} {title}
Loading Comments...