The 5e project, no doubt timed for the college-based Strixhaven: Curriculum of Chaos that Wizards of the Coast will release for D&D shortly (shipping allowing), is only a 7-day Kickstarter project. It’s funded already, with over a thousand backers and it’s not too late to join in.

The 5e campaign is all about improving your tabletop experience. It’s pregenned characters but the selling points are the minis for them and some excellent looking character sheets in a folio style.

I mention Strixhaven in the intro but, of course, it doesn’t have to be. Any setting with a suitable college, university or school will do.

To assist with that, Steamforged Games have divided the characters into Houses and themed those.

A one-shot adventure called At the Grand Academy is also included. There’s even an Animal Adventures connection as the campaign includes a “dog professor”.

Welcome to Adventures & Academia! As a budding adventurer, you will be expected to adhere to school rules and represent your House accordingly.

Good luck on your first day!

The pledge tiers couldn’t be any more straightforward. If you want a reward then back with at least £30. That’ll get you 12 student minis, the Professor Dog, 13 character folios (which will be exclusive to the Kickstarter and PDFs of the one-shot, battle maps and character sheet design. 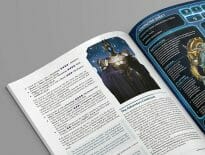 Tabletop & RPGs Free to Download: Ashes of Power for the Twilight…