You are here: Home / Games / Tabletop & RPGs / Slightly supernatural: A review of The Dee Sanction

I backed The Dee Sanction on Kickstarter, contributing less than £20 to get a hardback copy of the tabletop RPG. It was easily worth it.

You can get PDF copies of the now award-winning game from DriveThruRPG. I can’t find the hardback in stock anywhere, but the softback is still available from publisher All Rolled Up.

Written and designed by Paul Baldowski, who has previously reviewed for Geek Native, the game is about serving Queen and country in the late Tudor period.

Your character will be slightly supernatural.

The supernatural has crept back into England. There is political tension, religious tension, and Queen Elizabeth Tudor has inherited all sorts of problems from her family’s actions.

Magic has been made illegal, except for those governed by The Dee Sanction.

John Dee and Francis Walsingham, men with very different approaches and outlooks, run a secret agency for the Queen to protect the country from the rising supernatural threat.

Characters are agents for this group.

The catch is significant and the defining aspect of the game, more so than the Tudor period or the supernatural elements.

Characters are criminals who have been caught and given this chance to escape jail provided they work for the agency. They’ll be scapegoats if anything goes wrong, and they know it.

As a result, characters are conflicted. The sensible thing to do is to flee the supernatural threats they might encounter, not confront them, but to do would mean being hunted down and hanged.

Characters are vulnerable, expandable, mainly in the dark and whereas they’re all criminal because they’ve developed magic or esoteric talents, they are only slightly supernatural.

That set-up seems pretty dark to me, and I’ve only ever played The Dee Sanction that way. However, the game insists it should be whatever you want it to be.

In other words, if you want to go dungeon crawling through ruins or wrecks of the Tudor age, you can.

I think characters will die and die pretty quickly if you did try running The Dee Sanction as a dungeon crawl, but the option is there. My suspicion is that the audience for the game is unlikely to take that route.

Paul Baldowski’s more famous game is The Cthulhu Hack. That’s the audience; gamers who want monsters and mystery in equal measure, problems that can’t be defeated with a boot to the door.

I think historical pedantry is a more likely debate when it comes to the game’s vibe. Fortunately, The Dee Sanction has a more realistic response to that. This time, there’s no shrug and a “Meh, you can if you want…”. This the time, it’s a “The Dee Sanction isn’t about pedantry or historical purism”.

I’m not a historical purist when it comes to historical RPGs, but I do want the game to feel right. I had to research a bit before I felt comfortable stepping into The Dee Sanction.

I’m Scottish. The Act of Union didn’t happen until 1707. That’s about 150 years before the era this RPG was set. I simply didn’t know enough about English history.

Oh, but there are overlaps. In 1587 Mary, Queen of Scots, was Executed. That’s a date that The Dee Sanction mentions and, despite feeling I needed to read some history books, there is a surprising amount of bullet-point and paragraph history in this slim hardback.

Your insecurity around knowing enough history might not be as strong as mine.

There are three stats in the game; Physicall, Intellectuall and Supernaturall. Two LLs. These resources will have a dice value assigned to them, from d4 to d12.

When a dice roll is needed, roll that appropriate dice, a result of 1 or 2 means “Falter”. Falter isn’t fail. It means adverse complications, including taking damage. Any other outcome is a success.

That’s not so bad, is it? The game’s engine takes the corners off the potentially grim set-up for the game. Yes, characters are rookies against remnants, sometimes, but the dice should favour them.

It’s only if the dice need to be rolled a lot, only when things start to go south, that the engine becomes a war machine of attrition.

There are other levers to pull. GMs can step up or down the dice rolled according to difficulty, and there are advantages/disadvantages mechanics.

Character creation also means picking abilities, occupations, favours and those quirks which earned these criminals for the attention of John Dee and the crown.

There’s also Tradecraft. This is a mechanic which the group, as a whole, picks and adjusts at the start of an investigation. It rewards the characters when they get their act together and start pulling in the same direction. It’s a reason to do so.

Tradecraft is a clever touch in The Dee Sanction. Time and time again, in my RPG games, it’s been the thing that anchors the response from the group and keeps actions on track.

I can take or leave this feature, but The Dee Sanction also supports chargen by playing card draw. I see the attraction, but it also means more needs to be squeezed into rows and columns. Having a Tarot-style pack of playing cards or something else supernaturally suggestive might make the difference.

I’m mixed on Evlyn Moreau’s art. I did not initially find the style to my tastes, but it has grown on me over time. I now associate the developed line art that hints at more with the game.

We’re not getting mythos-style horrors rendered in dangerous details here. We’re getting sketches that might have been found in a Tudor’s journal.

I think The Dee Sanction is very much one of those RPGs that finding the right group of people to play it with makes a huge difference.

You’ll want to find an intelligent group of gamers to play it with, people who can find the right level of angsty drama appropriate for Tudor scheming, horror suitable for supernatural mystery and tactical skill applicable to a streamlined engine.

The RPG is 70 pages, only 70 in A5 format. The Dee Sanction isn’t a big book, but it packs a surprising amount in!

There’s the setting, the whys, whos and hows of the rising threat in England. There are suggestions of in-theme names, information about the Tudors, timelines, monsters and magic.

The Dee Sanction is excellent value for money.

It’s also a great game. Months after the game won Best RPG at UK Expos, here I am with my two thumbs up for it as well.

This has raced to the top of of my favourite games to run. Atmospheric, creepy, grotty, funny, and with wonderfully flawed and fragile player characters. Its setting allows for a vast ensemble of fascinating historical figures to make appearances. It’s terrific stuff, and a book anyone interested in mystery/horror/historical TTRPGs should have on their shelf. Nice review.

Slightly supernatural: A review of The Dee Sanction 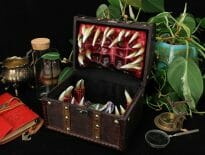 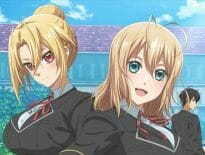