This D&D Icons of the Realms figure from WizKids lives up to its name. It’s the regal gold dragon of legend and the latest in the model-makers dragon range.

The company and retailers are taking orders now, and it is due to ship later this year, just not currently.

There are two different heads for the dragon. You don’t use both simultaneously but swap them around depending on whether you want flames or not.

You might have played with a barbarian character who tried that on a dragon in-game, too, even though gold dragons are traditionally heroic and oppose evil.

Here’s how WizKids describe the model and its pose;

A gold dragon has a sagacious face anointed with flexible spines that resemble whiskers. Its horns sweep back from its nose and brow, echoing twin frills that adorn its long neck. A gold dragon’s sail-like wings start at its shoulders and trace down to the tip of its tail, letting it fly with a distinctive rippling motion as if swimming through the air. A gold dragon wyrmling has scales of dark yellow with metallic flecks. Those flecks grow larger as the dragon matures. As a gold dragon ages, its pupils fade until its eyes resemble pools of molten gold. 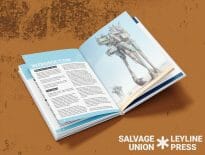