You are here: Home / TV / Anime / In/Spectre’s second season gets a moody trailer

In/Spectre didn’t quite get a rosy review from Geek Native but will get a second series. The show is about two people who overlap with the spirit world and are caught up in it.

Kuro has his healing powers due to childhood trauma that the show finds a dark spin for. The other, Kotoko, was kidnapped by the spirits, mauled by them and now missing parts of her body, is neither fully real nor unreal.

However, rather than being sinister or spooky, the season ends in a weird grind against an unengaging foe. Last year, In/Spectre season 2 was announced. The trailer, just out, suggests the series will try again with a sombre mood.

Crunchyroll, which streamed season 1, translates a message from Mamoru Miyano, the voice actor who plays Kuro.

Thanks to everyone’s support, we have decided to produce the second season of the anime! Thank you very much! I can’t help but be happy as well. “In/Spectre” is an “innovative mystery” series. I am sure that we will be able to bring you another mystery with a totally different taste. I’m looking forward to it myself, and I’ll be working diligently to make sure I can express Kuro’s thoughts. Please look forward to the broadcast!

The series is based on the light novels by Kyo Shirodaira and season two is expected to return in multiple territories via Crunchyroll. The platform describes it as;

Iwanaga Kotoko became the god of wisdom to the supernatural beings and spends her days solving problems for them. However, the boy who she fell head over heels for, Sakuragawa Kuro, is someone that is feared by all supernatural creatures. The two of them face various mysterious incidents involving the supernatural in this love x romance x mystery series. Where will these fantastical incidents lead them and what will happen with Kotoko’s crush? 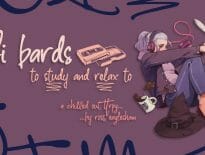 Tabletop & RPGs “lofi bards to study and relax to” is …