The award-winning Chew is getting a tabletop RPG thanks to a very well funded Kickstarter.

It’s a supernatural, weird post-food apocalypse Forged in the Dark RPG. It’s all those things.

In the RPG, player characters investigate cases (food crime), get caught up in action sequences, advance the narrative, explore personal trouble and go head to head against villains. It’s much like a TV series in structure.

The World Has Changed
In a world where all poultry (I’m looking at you chicken) is illegal after a catastrophic outbreak of the bird flu killed over 100 million people, the U.S. Food and Drug Administration is now the most powerful law enforcement agency on the planet. As a member of the Special Crimes Division, it’s your job to investigate food crimes from chicken trafficking and egg dealing, to fricken (chicken/frog hybrids) mutants gone wrong, and put food-powered criminals behind bars.

Food Powers
Yeah, that’s right! Food. Powered. Criminals. The world looks almost like our own except for the intrusion of food-powered mutations. No one knows when they appeared in human history, but some people just have them. Maybe you cook, eat, or draw food, but when YOU do, something supernatural happens. You have a unique experience with a particular food not many can relate with.

The 50+ page quickstart has the basic rules, advice on running the game and an adventure with pre-generated characters. If you want to take your first steps into the Chewniverse, then there should be just about enough here to get you started. 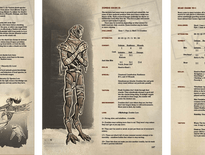 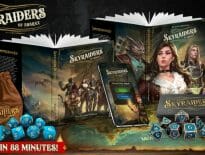