You are here: Home / Games / Tabletop & RPGs / Genre Police: Sand in the Eyes

After looking at railroads, it’s natural to return to the idea of their ideological opposite, the Sandbox.

As a term on our survey, this is another that got a fairly good response. Roughly 97% of people knew what a sandbox game was. That being, an RPG campaign that was defined by one participant as

A world setting that gives players the feeling of complete freedom to choose their own paths and adventures, and to create their own stories within the restrictions of the world setting.”

The majority of responses to the sandbox format seemed to indicate that they were a superior idea and the thing all the best games are made of. And on one level, of course, we could all work towards a good level of player agency. But I wonder if we aren’t setting ourselves up to fail with regard to the idea.

It’s very easy to create an interactive world that you find interesting as GM and then assume you’ve done enough. Or that it is up to the players to uncover plot. Sandboxes are secretly littered with traps. They take so many forms.

While they are having fun, eventually, there’s lots of clutter that has been left unresolved, and the whole campaign looks formless. There’s no central tale, and people often spend a long time debating what to do next.

It’s weird that I have never heard this piece of advice before, but it’s important while you have a game that you occasionally prune the story elements.

Take stock and put stuff players haven’t really shown interest in into the background and bring forward the stuff that is really catching.

Allow them to hunt down a recurring enemy and finish that feud while introducing a new nemesis. Resolve a player’s background stuff. This leaves things with a feeling of being finished.

Moreover, make sure you, as GM, know exactly what is important and big stuff. If the players aren’t finding anything important, tie it to their character’s interests.

Make it personal in a direction you think they might enjoy. They still don’t have to bite, but at least they have some way of assessing which of the many options might take priority.

You thought you were ready. You’d planned a series of twenty or so hooks in the city. A massive hotbed of intrigue and factions. Session three, the players leave the city because they’ve angered the law and never look back. You have to improv in the wilderness. None of it sounds as good as the city would have done.

It’s very easy with a sandbox to put a lot of time into wasted enterprises or stuff nobody sees.

It’s important not to get too carried away and build it all at once. But also, it’s important to have edges to each Sandbox. This buys you time.

Maybe the city could be surrounded by a protective field or crumbling difficult mountain range. They can’t just leave in a short space of time. It buys you a sessions grace to have a plan.

You need to grow a massive world as series of sandboxes that slowly grow together. Theme each one well, and when players transition, they’ll feel like they have moved into a new zone.

It’s also better to have several smaller locations with their own set of mysteries rather than lots of little pieces of a mystery littered around a globe that players aren’t going to visit all of. This leads us to…

All they have to do to save the empire is visit the Temple of the Hopping Frog! That way, they could have cleared all of this invasion with no problem. But they went a different way. Now there’s no hope. Should have listened to the prophecy!

It should be mentioned that if you have a story that requires them to follow a route and find things out, maybe don’t make it a sandbox.

Embrace the skillset you have. If you make them visit one specific location to find one specific thing out, then the world isn’t a sandbox. It’s a railroad in disguise. You may as well have directed them to the location because then they would have felt like they had direction.

This is something that a lot of GMs do. They know that player agency is important and let them do anything but feel like they are failing or the game is bad because the party keeps getting off track.

Remember, there’s no timeline. I mean, even if they fail to be heroes or do anything but mess around and the world falls to darkness, that’s still a worthy story – as long as you all don’t mind telling that story.

There’s no embarrassment in wanting a railroad. Sometimes you have a simple tale you want to tell well. Don’t try to force that into a sandbox story. Work out which move is appropriate with each tale.

The important thing to take from each of these examples is that you offering a sandbox is not a solution or a special thing that will make your game better – it’s simply a term for the form of storytelling along a spectrum of player agency in the development of the plot. And you need to make that clear to your group.

In the purest ideal of a sandbox, the GM makes no work towards the plot advancing, leaving that work to the players, which some might not be aware of and can resent, especially if they are used to a GM who gives them the plot on a platter. So keep taking steps to keep your world fresh and alive. Don’t just rest once it is ready,

We will continue this theme in the next article when we look at planning a journey in an RPG and bring in the next set of terms on our survey – Hexcrawl and Pointcrawl.

Genre Police: Sand in the Eyes 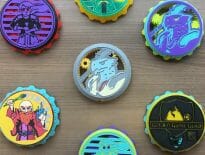