However, the team is recruited by a resistance group, a third faction plotting to overthrow Montezuma. So what will Greycastle do? Save the prince or save the people of Mexica?

The last dragon prince has been abducted and is kept prisoner by an unknown threat: AZTEC MEXICA. Helm Greycastle and his band of outsider adventures are tasked with exploring the uncharted land that was once at the brink of enslavement by the savage Spanish Conquistadors…but the Aztecs used sorcery to thwart the Conquistador’s murderous rampage. The possible enslavement caused the ruler, Montezuma III, to declare himself the dictator of MEXICA causing a power shift and class division. Greycastle and his comrades are recruited by an underground group lead to overthrow Montezuma III and the Gods that suppress the land.

The first issue of the new series includes a one-shot RPG by Tristan J. Tarwater, illustrated by Jen Vaughn, compatible with 5e and set in the same fictional Mesoamerican world as Helm Greycastle.

Helm Greycastle is the result of a Kickstarter that made more than $13,000 in pledges. It’s being published by Top Cow the same studio behind Witchblade, Aphrodite IX and Blood Stain. 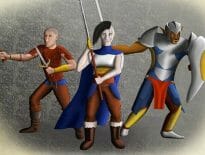 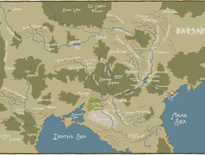