It’s the ghosts of the past out for action today in this emotional (or is that just me?) trailer for Ghostbusters.

It’ll be a Thanksgiving / 25th November USA release for this much-anticipated sequel.

Directed by Jason Reitman, produced by Ivan Reitman, the official next chapter from the original series picks up when a single mother with two kids arrive in a small town.

It’s no ordinary town, though, and this is no typical family.

The family theme is strong with Ghostbusters. It was Ivan Reitman who directed the original. Now it is his son who is leading this sequel. 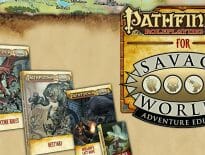