You are here: Home / TV / Anime / Peach Boy Riverside: Demons and humans can live together, just not always in peace

Inspired by Japanese folklore, an old woman finds a child inside a giant peach who turns out to be divine demon slayer Peach Boy Riverside is heading to TV.

The anime is likely to be very different. There’s no suggestion there’s a giant peach involved, but the anime seems to have thrown in a princess with dangerous eyes and plenty of demons to make up.

According to the blurb, the boy in the show, Mikoto, does have the “power of the peach”. If so, we may well yet see the strange fruit.

Mikoto will have a voice actress with Nao Tōyama providing the talent. She’s also Rin from Laid-Back Camp, Ruka from Rent-a-Girlfriend, Claire in Gleipnir and played another boy as the young Louis James Moriarty in Moriarty the Patriot.

The English translation of the manga is sold on comiXology by Kodansha. They describe the plot;

Sartrienne Aldraic, princess of the Kingdom of Aldraic, dreams of traveling the world — a dangerous dream in a land where monsters roam the countryside as they please, and humans live behind high, strong walls. But when a chance meeting with traveler Mikoto gives hope to her dream, he shatters it soon after, as he reveals himself to be none other than Momotaro, ruthless demon-slayer. Though horrified by the gore Momotaro leaves behind, Sartrienne is convinced more than ever that she needs to learn about the world beyond her walls, and journeys out… following the steps of the mysterious, charismatic, terrifying boy she met that day…

Peach Boy Riverside: Demons and humans can live together, just not always in peace 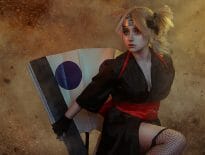 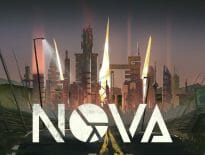