Fans of the series will be satisfied, but not blown away by Goblin Slayer -Goblin’s Crown.

The Goblin Slayer special doesn’t repeat the brutal and infamous opening of the series. In fact, it shows a far more censor friendly abridged version of how our naive Priestess met Goblin Slayer as a way of catch-up for viewers coming to the title for the first time.

It’s almost as if it doesn’t dare repeat those scenes. It doesn’t. That’s not too surprising for a movie, though, one that had a cinematic release in Japan. The bigger the screen, the more careful the directors tend to be.

That cinema release is one reason this release is sometimes called “movie”. It’s also sometimes a special episode. Call it what you will.

The recap of that initial and doomed mission did leave me wondering about the adventure’s guild in the world, though. Those officials knew that party of young heroes was marching off to a horrible fate, and they let them go.

That said, this feature-length Goblin Slayer does feel like Goblin Slayer; especially the second half of the series. Don’t expect everyone to live. Expect the goblins to be cunning and cruel. Offset that with some camaraderie, you know, for a sliver of warmth.

The same voice actors are back, at least in the Japanese language version, and the attention to detail in the animation is there. There’s blood that trickles, snow that drifts and shadows that flicker dangerously.

The premises of the special is simple enough; a noblewoman known for her fencing skills has led an adventuring party into the frozen north to deal with a goblin problem there. When they don’t come back, the situation is escalated, and Goblin Slayer and the full team are sent in to investigate.

Do you know what? I reckon the adventurers’ guild had a pretty good idea that the noble fencer was on a mission far more complicated than it seemed, but they let her go anyway.

I suppose that’s one of the tenets of the show; bad things happen to good people. Assuming you’re safe, even if that’s what most people do, is the most dangerous thing to do. It’s only the efforts of a few fighters who take the risk that keep the rest of us safe.

The “realism” of grit and suffering that the first season likes to spotlight now and then isn’t forgotten. Here we see characters get hungry, they get cold, and they need to keep careful track of the spell slots.

It’s impressive how the very notion of spell slots makes the action better. Sometimes anime leaves you wondering why a hero character simply doesn’t unleash one of their powerful signature moves. Goblin Slayer has the answer; they can’t, they’ve used up their quota and, oh look, there are about a hundred goblins and their dangerous leader still to deal with.

For me, that dangerous leader comes at a cost that needles away at one of the concepts that make Goblin Slayer such a great franchise.

The best parts of season one were when the goblins were just your run of the mill vulgar goblins, in a cave, being brutal and sly. The need to bring in a big bad, somehow qualifying as “goblin” through some classification loophole, undercuts the idea that the typical gobbos are a threat.

These uber-goblins do make it much easier to provide some dramatic showdowns, though, and their presence means we can expect a plot twist or two. Or, at least, a combat option curveball or two.

I know the show is following the manga, but it’s a shame it’s the same trick twice, once in season one and then again for the movie. In plot terms, it’s never yet been “just the goblins”. Not the run of the mill vulgar goblins, anyway.

The marketing for the movie doesn’t even try to hide it. The goblins up north are acting odd, we’re told in advance. There are no spoilers here. If it was just run of the mill goblins, then the noble fencer and her troop would probably have been able to do a lot better.

Sometimes, though, there’s short term pain for a long-term gain. There are some clunky moments where, for some reason, Goblin Slayer fiddles with an arrowhead so that it breaks off from the shaft after it hits a goblin. Why? So the would fester unless the little green guy is brave enough to dig the head out. There’s a whole scene built up just so our favourite buckethead hero can explain that trick.

So, yeah, expect the payoff later. There’s a reason why the writers wanted you to notice. As it happens, that might be the same reason why both the movie and the series circles back to the uncommon and bloody awkward scenarios when a large group of goblins get organised.

My highlight of the show might be a throwaway remark or might single where things go in the future. I suspect it’s the former. In the world of Goblin Slayer there are two moons; one that shines faintly red, the other green.

Where do the heroes think the goblins in their fantasy world come from? From the green moon. Who knows, maybe it’s true, but it makes lovely folklore sense to me. It’s also an excuse for the animators to pull the camera back and show us beautiful vistas, whenever we’re not fighting down in the mud and blood.

Overall? Just one thumb up. My other hand stays down, resting on the pommel of my sword because I’ve watched enough Goblin Slayer to know to keep a weapon near me at all times.

The movie is about 1h25 minutes long and available on Crunchyroll. 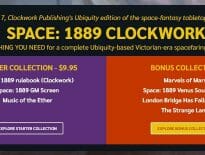 Tabletop & RPGs Space: 1889 resurrected by The Bundle of Holding (… 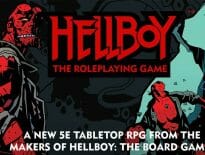