You are here: Home / Games / PC / Grid Force partners with LGBTQ+ non-profit It Gets Better

“You are not alone” is the message that many young lesbians, gay, bisexual, transgender and queer people need to hear all around the world. The It Gets Better project is about making that happen.

Playtra Games, the developers of Grid Force: Mask of the Goddess, have announced a partnership with It Gets Better so they can help.

Grid Force – Mask of the Goddess is a single-player and co-op Steam game. It’sIt’s an action RPG with 45 all-female playable characters.

In the game, players will collect the Masks of Power and face such choices as to whether to save or destroy the world’s goddesses.

Bernardo hopes that Grid Force can be used to reach out to LGTBQ+ youth, to say that it gets better and that the games industry believes in them.

Representation in games matters because for many kids, playing a video game is their only way to get beyond their immediate bubble. The world is changing, but for many LGBTQ+ children and young adults, they still feel alone and isolated.

But you’re not alone. You might not be in the best situation right now, but you can join communities online or play games to hear stories like your own. The It Gets Better Project has been sharing this message for years, and we’re excited to get to be a part of that mission.

The It Gets Better Project will be linked on the start screen of the game. Grid Force’s female cast are all hand-illustrated by female talent.

Grid Force partners with LGBTQ+ non-profit It Gets Better 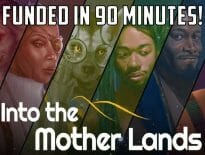