You are here: Home / Games / Tabletop & RPGs / Jovian Whispers adds more The Expanse and Terminator horror to Shadows Over Sol

Shadows Over Sol is a dark sci-f RPG published by Tab Creations in 2016. Since then, the game has had thirteen adventures, five supplements, seven accessories and a full campaign. Jovian Whispers is a campaign and a sourcebook for it.

Inspired by stories like James S.A. Corey’s The Expanse, Clarke’s Space Odyssey, Alien and the Terminator, the Kickstarter campaign asked for $2,000. With 17 days left, at the time of writing, the project has twice that in pledges. You can see the latest total and join in from the pitch page.

Jovian Whispers is a campaign and sourcebook for the Shadows Over Sol roleplaying game. It follows up on the mystery of the Jupiter Group Incident, in which all four Jovian colonies went suddenly and inexplicably silent.

No one knows the cause of this mysterious event, but somewhere in the dark and ruined colonies of Jupiter the Insurrection Virus uses its clanking machines to plot the downfall of all humanity…

Any RPG that’s successfully produced so many supplements from Kickstarters is doing something right.

There’s also a Patreon from Tab Creations, which supports the game. There are two dozen or so backers in that. It looks like a cost-effective way to get future adventures and supplements if you adopt the game.

Jovian Whispers brings with it;

It is possible to get the core rules from Kickstarter.

A pledge of $15 gets you into the add-ons and brings you the Jovian Whispers’ PDF, all the PDF stretch goals and immediate access to the unedited review draft.

However, a pledge of $35 and shipping adds the hardcover copy of the campaign and sourcebook.

At $70, you get the hard copy of Shadows Over Sol as well as Jovian Whispers and the Siren’s Call campaign. You also get copies of all three in PDF.

Lastly, a pledge of $200 gets you physical copies of the entire game line.

There are still stretch goals to unlock and the estimated delivery for all the tiers in November 2021. 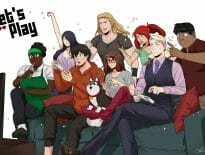