You are here: Home / Games / Tabletop & RPGs / Post-apocalyptic fantasy Out of Ashes rises on Kickstarter

Liminal author, Dr Paul Mitchener, has put his latest RPG on Kickstarter. Dr Mitch has backed over 100 projects himself, and Liminal has been a hit.

Out of the Ashes uses a system involved from Liminal. Changes include a 2d10 mechanic rather than 2d6 and a Spirit system for players to tap into when they want to boost their stats. The ask for the project is £10,000, but within minutes the campaign had hit £2,000. You can see the latest total or pledge on the project page.

Player characters in Out of the Ashes are heroes with magic who defend the community. However, even after the Nameless Emperor’s fall, the land is corrupt, and monsters are plentiful.

Community is in the centre of play with Out of the Ashes. Players create characters and a community. Quests that might take up the PCs time are missions that the community itself need to be successful.

The full-colour book will be illustrated by Jon Hodgson, with other artists coming on board as stretch goals allow. Hodgson, of Handiwork Games, has previously worked on projects like The Lord of the Rings RPG, The One Ring when it was with Cubicle 7, and he was creative director.

All Rolled Up are also on board to help with gaming accessories such as rolling trays, pen and cardholders.

A pledge of £15 will get you the PDF of the core rules while £25 adds in the digital stretch goals.

A print book costs £25 while the Liberator level of £45 offers the core rules and a quickstart in print, with the PDF and all digital stretch goals.

The expected delivery is in December 2021.

I am very tempted by the combination of Hodgson art and All Rolled Up swag but see I may not be able to count on add-ons for them. I certainly won’t find them for sale outside the Kickstarter. The £65 Loremaster tier adds an exclusive dice tray and is limited to only 50 orders, as is the £100 Rune Wizard tier after.

Correction: 11 Jan 2021 – An earlier version of this post said that Jon Hodgson was art director at Cubicle 7. He was creative director.

Thank-you so much for bringing this to people’s attention!

Post-apocalyptic fantasy Out of Ashes rises on Kickstarter 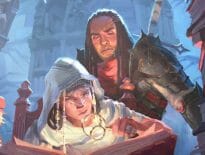 Tabletop & RPGs D&D: Candlekeep Mysteries is the next officia… 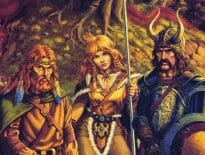 Books Dragonlance leak comes weeks after a legal truce
wpDiscuzComment Author Info
Manage Cookie Consent
This site uses cookies 🍪, and links are ads that may earn bloggers some money 💰, and with this alert, I very much hope that these dark truths 🧌 are acknowledged.
Manage options Manage services Manage vendors Read more about these purposes
Preferences
{title} {title} {title}
Loading Comments...